Avitus Group Donates 20 Alaska Zoo Animal Adoptions Paired with 20 Stuffed Polar Bears to Children in the Hospital in Honor of Company’s 20th Anniversary; Company Aims to Make the Holidays Brighter for Children Spending the Holidays at the Children’s Hospital at Providence, While Supporting Education Programming at The Alaska Zoo 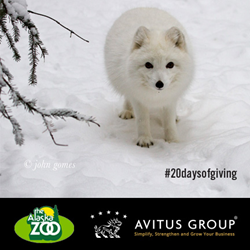 On behalf of everyone at the Alaska Zoo, we are really grateful for the generosity of Avitus Group. When the business community comes together to support a local non-profit we are working together to make this community a better place.

"Avitus Group makes it a priority to give back to the communities we're fortunate enough to live, work and play in, and we encourage other businesses to consider giving the gift of animal adoption this holiday season," says Avitus Group Public Relations Manager Dianne Parker.

"We're happy to help make the holidays a little brighter for children in the hospital while helping The Alaska Zoo, which is an outstanding non-profit organization," says Avitus Group Anchorage Director of Operations Dee Hudson. "Avitus Group supports education. The Alaska Zoo's robust education programming for the state's youth and for youth worldwide via distance education aligns well with our giving goals. We're also happy to have The Alaska Zoo as a valued member of Avitus Group."

Avitus Group's 20 Days of Giving campaign kicks off December 1, 2016 and runs through December 20th, 2016. During each day of the campaign Avitus Group is donating an animal adoption, paired with a stuffed polar bear from the zoo's gift shop, to a child spending the holiday season at the Children's Hospital at Providence in Anchorage. The Alaska Zoo has 40 unique animals available for adoption, ranging from $30.00 to $1000.00 per animal adoption. The animal adoption program is featured on the zoo's website. Avitus Group is highlighting half of the 40 animals during the company's 20-day giving campaign. Avitus Group is featuring one adopted animal each day during the campaign via its Facebook and LinkedIn pages.

"On behalf of the Board Members, Executive Director and all the staff of the Alaska Zoo we are really grateful for the generosity of Avitus Group. When the business community comes together to support a local non-profit we are working together to make this community a better place. The animal adoption program at the Alaska Zoo is yet another way for the community to support the zoo by symbolically adopting an animal and contributing to the care and feeding of the many animals that call the Alaska Zoo home," says The Alaska Zoo Development Director Jeannette Menchinsky. "Additionally Avitus Group has shown further commitment by purchasing Alaska Zoo stuffed polar bears to give to the children staying at the Children's Hospital at Providence. This partnership between the Providence Foundation and the Alaska Zoo is a great example of two non profits working together to make the day a little brighter for children who are going through a difficult time. The mission of the Alaska Zoo is to promote the conservation of Arctic, sub-Arctic and like climate species through education, research and community enrichment. Thank you Avitus Group for your support of the Alaska Zoo."

The Alaska Zoo's Animal Adoption Coordinator Carrie Smoldon has been managing the adoption program since 2006. Revenue from adoptions has increased from $15,000 a year to more than $35,000 a year, and Smoldon would like to top $50,000 in 2017. Animals can be adopted and gifted via The Alaska Zoo's website.

"The donations we receive from the adoption program are an important part of the quality care we are able to provide our animals," says Smoldon. "Animal adoptions are a fun way to support The Alaska Zoo and make unique gifts for any person and any occasion."

Avitus Group is a worldwide company, with offices in Anchorage and Fairbanks, that simplifies, strengthens and grows businesses by providing 'back office' support (Payroll, accounting, taxes, recruiting, information technology, human resources, co-employment and much more.) When a business uses Avitus Group, all of the necessary yet burdensome functions of the business become Avitus Group's responsibility, so the business can focus on what it does best. Avitus Group serves clients nationwide through regional office locations from coast to coast. The company also serves international clients through partner locations in Europe, Canada, China, England, India, Japan and Singapore.