Using a combination of deadly glutaraldehyde fixation and cryogenic storage, researchers have demonstrated a way to preserve a brain’s connectome (the 150 trillion synaptic connections presumed to encode all of a person’s knowledge) for centuries-long storage. This laboratory demonstration clears the way to develop Aldehyde-Stabilized Cryopreservation into a ‘last resort’ medical option, one that would not prevent the patient’s biological death but would prevent the destruction of the patient’s unique connectome, offering at least some hope for future revival via mind uploading. 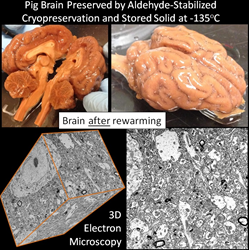 Images of the pig brain that won the prize

The neuroscience and medical communities should begin an open debate regarding Aldehyde-Stabilized Cryopreservation's ability to preserve the information content of the brain.

The Brain Preservation Foundation’s (BPF) Large Mammal Brain Preservation Prize has been won by the cryobiology research company 21st Century Medicine (21CM) and lead researcher Robert McIntyre (now co-founder of the startup Nectome). The Prize required the successful preservation of synaptic connectivity across an entire pig brain in a manner compatible with centuries-long storage. To accomplish this, McIntyre’s team scaled up the same procedure they used to previously preserve a rabbit brain, for which they won the BPF’s Small Mammal Prize in February 2016. This procedure, termed Aldehyde-Stabilized Cryopreservation (ASC), was published by McIntyre in 2015 and consists of perfusing the brain with glutaraldehyde and cryoprotectant prior to cryogenic storage. Extensive 3D electron microscopy was performed to verify the quality of connectome preservation following rewarming of the pig brain from cold storage. For this achievement the researchers will be awarded a prize purse of $80,000.

It is important to understand that the researchers did not actually revive a pig or pig brain. The first step in the ASC procedure is to perfuse the brain’s vascular system with the deadly fixative glutaraldehyde, thereby instantly halting metabolic processes by covalently crosslinking the brain’s proteins in place. Glutaraldehyde is sometimes used as an embalming fluid, but is more commonly used by neuroscientists to prepare brain tissue for the highest resolution electron microscopic and immunofluorescent examination. It should be obvious that such irreversible crosslinking results in a very, very dead brain making future revival of biological function impossible. So, it is reasonable to ask: “What is the point of a procedure that can preserve the nanoscale structure of a person’s brain when biological revival is impossible?” The answer lies in the possibility of future non-biological revival.

A growing number of scientists and technologists believe that future technology may be capable of scanning a preserved brain’s connectome and using it as the basis for constructing a whole brain emulation, thereby uploading that person’s mind into a computer controlling a robotic, virtual, or synthetic body. The Brain Preservation Prize challenged the scientific community to develop a ‘bridge’ to that future mind uploading technology. The similarity to cryonics is obvious, but in this case the possibility of biological revival was dismissed as currently not feasible. Focus was instead directed toward provably preserving the information content of the brain as encoded within the connectome. Quoting from a recent video presentation by BPF president Kenneth Hayworth: “Aldehyde-Stabilized Cryopreservation is cryonics for uploaders”.

Hayworth expands on this vision in a recent online publication entitled “Vitrifying the Connectomic Self: A case for developing Aldehyde-Stabilized Cryopreservation into a medical procedure”. In it he points out that besides the ultrastructural details of the connectome, ASC likely preserves key molecular details such as the locations and identities of ion channels as well. Hayworth believes that evidence supporting the efficacy of ASC is now sufficiently strong to warrant serious debate as to whether it should be developed into a medical procedure. Quoting: “The option of choosing ASC should be withheld from terminal patients who desire it only if the available science does not support the possibility of future revival. The neuroscience and medical communities should begin an open debate regarding ASC’s ability to preserve the information content of the brain.”

The significance of this Prize win is sure to be debated. Those who dismiss the possibility of future mind uploading will likely view ASC as simply the high-quality embalming and cold storage of a deceased body—an utter waste of time and resources. On the other hand, those who expect that humanity will eventually develop mind uploading technology are more likely to view ASC as perhaps their best chance to survive and reach that future world. It may take decades or even centuries to develop the technology to upload minds if it is even possible at all. ASC would enable patients to safely wait out those centuries. For now, neuroscience is actively exploring the plausibility of mind uploading through ongoing studies of the physical basis of memory, and through development of large-scale neural simulations and tools to map connectomes. This Prize win should shine a spotlight on such neuroscience research, underscoring its importance to humanity.

About the BPF: The Brain Preservation Foundation is a non-profit organization with the goal of furthering research in whole brain preservation. The BPF does not currently support the offering of ASC, or any other preservation method, to human patients. This single Prize winning laboratory demonstration is insufficient to address the types of quality control measures that should be expected of any procedure that would be applied to humans. BPF president Kenneth Hayworth has released a document outlining his position on what should be expected prior to any such offering.