Rubb USA has completed a 32’ x 97’ super insulated structure at Summit Station on the Polar Ice Cap in Greenland for the National Science Foundation. 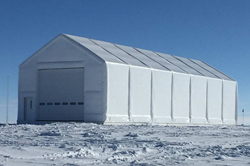 The building was designed and engineered to sit on a foundation of wood/metal that can be best described as an giant toboggan, so the structure can be moved periodically to prevent being snowed over.

Located at 72° 36? N latitude, and at an altitude of 10,600 feet with a mean annual air temperature of -31°, Summit Station has long challenged the physical fitness of its visitors.

Long-time Rubb site supervisor and current salesman Marc Boutet spent nearly a month overseeing the erection of the Rubb BVR on the polar ice cap. Upon his return to the Rubb offices in Sanford, Maine, he declared: “What an experience!”
The Rubb building was neatly packed and delivered via a USAF C-130, equipped with skis to land on the ice cap.

Food and supplies were stored “undersnow” in a dug out cavern. Due to snowfall the depth of the cavern increases significantly over time to the point where the crew will dig a new ‘refrigerator’.

The crew’s accommodation for the duration of the construction process was a series of specialized tents to protect people from the elements. According to Boutet, "we installed the building in June so it never got dark thus sleeping was always a challenge".

RUBB INNOVATION ON DISPLAY
The building was designed and engineered to sit on a foundation of wood/metal that can be best described as an giant toboggan, so the structure can be moved periodically to prevent being snowed over. The Rubb BVR storage facility, known as the Summit Mobile Garage, is a heavily insulated building designed and engineered to be moved or, more aptly, pulled by a Sno Cat from place to place. Due to massive amounts of drifting snow it is easier to tow the building to a new resting spot rather than remove the masses of snow. "The (NSF)guys told me they wait for a warm, balmy day and drag the building to a spot less likely to get buried with drifting snow… warm and balmy means a few degrees above zero,” Boutet added.

Once the steel framework was constructed, Thermohall® PVC sheets were pulled/adjusted onto the frame via snowmobile(no cranes or forklifts available). The cladding on this building is R-35 rated Thermohall® with 8” of high-density insulation – after all the temperature can reach -100F! Rubb Thermohall® is designed to withstand and perform in the harshest of environments.

The Rubb BVR is equipped with a generator driven lighting and heating system. The structure will support operations at Summit Station and will primarily serve as an equipment and maintenance shed.

When asked what was most interesting experience about the Greenland project, Marc smiled and immediately said departing the site on a C-130. “The runway, actually ‘snowway’ is over three miles long and lined mostly with black flags. When you see red flags the plane must stop and turn around and try to take off again in the opposite direction. This is at nearly 11,000 ft. altitude and the snow creates a lot of friction. After three failed attempts to lift off we stopped and the land crew attached portable ‘rockets’ to the plane to help us gain enough speed to gain altitude. I heard a couple of ‘booms’ and up in the air we went! All I could think was… what is going on? Well, I made it!”

The National Science Foundation (NSF) is an independent federal agency created by Congress in 1950 “to promote the progress of science; to advance the national health, prosperity, and welfare and to secure the national defense.”