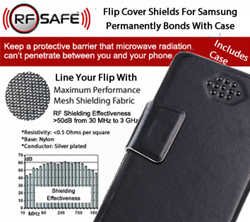 Men talking on the phone for more than an hour a day had 17% fewer highly motile sperm than men who talked less than 15 minutes a day.

These studies show men who carried their phones in a pocket or on the belt were more likely to have lower sperm counts and/or more inactive or less mobile sperm.

One study was conducted at the Medical University of Graz, in Austria; the other at the Queens University in Canada. Men in the studies who reported cell phone use showed lower levels of the luteinizing hormone (LH), an important reproductive hormone that is secreted by the pituitary gland in the brain, and higher levels of circulating testosterone.

Preliminary findings for the research was published in the US National Library of Medicine National Institutes of Health on Apr 26, 2013. http://www.ncbi.nlm.nih.gov/pmc/articles/PMC3921848/

In the most striking findings, the studies prove that health effects happen at levels of exposure far below the current SAR safety guidelines imposed by the FCC.

Dr. Conrado Avendano, heading a team of researchers in Argentina, reported that they studied semen samples from 29 healthy, fertile men and measured sperm motility after a four-hour period of exposure to WiFi radiation.

Sperm in the control group was maintained at the same temperature for the same amount of time, without exposure to WiFi.

"There are precautions that can be taken. Most important might be using the cellphone's speaker option and texting more often. Also avoid carrying a phone against the body at all times without microwave shielding between the device and users. These precautions can help," says Coates.

Changing cell phone habits: It is common for men who talk on a cell phone using a Bluetooth device or other headset, that the phone is kept in a pants pocket or clipped to a holster. This exposes reproductive organs to cell phone radiation which lowers sperm count and/or poorer sperm quality in men who use their phones this way than in those who do not.

To stay up-to-date in the concerns facing radiation from cell phones and the best cell phone radiation protection from the #1 RF Safety company with over 15 yrs of phone RF shielding experience, visit http://www.rfsafe.com.