CSUN Professor, clinical psychologist, and social impact filmmaker Luciana Lagana is ready to engage in the 4th and final year of her NIH-funded research project on pain in older women 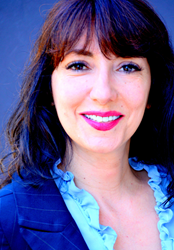 There is still so much that we do not know about older women’s physical pain, including ways in which they manage their pain either in collaboration with their physicians or by other means.

California State University, Northridge (CSUN) full professor of psychology, clinical psychologist, and social impact filmmaker Luciana Lagana has spent the past three years collecting data on the psychosocial and physical functioning of ethnically diverse older women experiencing pain symptomatology. The National Institutes of Health (NIH) Support of Competitive Research Program has approved the 4th and last year of funding for this $435,000 grant. Moreover, in the past few years, she has managed to incorporate her passion for filmmaking into a second line of research. After studying film production under the mentorship of Prof. Nate Thomas, Director of the prestigious CSUN Film Production option in the Department of Cinema and Television Arts, she started directing and producing numerous social impact feature films in an effort to help discriminated minorities. Prof. Lagana has been utilizing these films in randomized controlled trials to test whether watching them improves empathy and decreases biases often held against several minorities.

The research area of pain in older age covered in her NIH 4-year grant has several gaps that need to be filled. To address the need to develop and test a new measure that quantifies whether the health-related advice given by health providers is appreciated and followed by older women, Prof. Lagana’s research team is getting ready to validate her new 6-item assessment tool titled, “Satisfaction with and adherence to health provider's advice." In 2011, she received the highly competitive CSUN Preeminent Scholarly Publications faculty award for similar psychometric work in the area of non-medical quality of life as it applies to ethnically diverse older women. The findings of her current 4-year study will also help clarify whether her original model of physical pain in older age, which contains factors including demographics, depression, trauma, ethnic identity, satisfaction with and implementation of health provider’s advice, social quality of life, and coping strategies, is a strong model when applied to ethnically diverse older women.

Prof. Lagana is hoping that the results of her pain-focused investigation will add to the body of research on the experience of physical pain in older age. “There is still so much that we do not know about older women’s physical pain, including ways in which they manage their pain either in collaboration with their physicians or by other means. It is important to carefully assess issues of substance use and misuse as they apply to this understudied population. I am currently writing a grant proposal in order to obtain funding to continue and expand this line of research,” she concluded.