Dr. Luciana shared with us her state of mind after being pronounced a winner at the Hollywood Dreamz Film Festival. 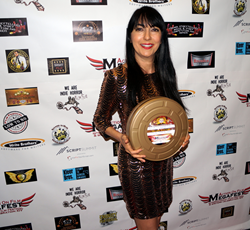 I will have great memories of this moment for a long time, and I will continue doing my best to make impactful social cause feature films that could positively influence their viewers.

From the synopsis of OFF THE STREETS FOR GOOD: In this documentary feature film, several previously homeless people recall their hard journey towards having a home again. Mistreatment was rampant and we hear about the difficulties living on the streets directly from a former prostitute who lost her eye when she was shot and a professor who was put on the streets by her parents for coming out as a lesbian. You will also learn about the struggles with homelessness from a classy middle-aged man, who now helps the homeless, and about the problems faced by a young gay black man who almost died living on the streets in the stranglehold of drug addiction but is now thriving as he helps the homeless as part of his job. The directors of two nonprofit organizations share with the viewers the pleasure that they receive by helping homeless individuals overcome their challenges.

Prof. Lagana performs randomized controlled trials using her films to test whether they have a bias-reducing impact on viewers. With her research team, she has conducted several research presentations at national and international conferences on this exciting and unique line of research and has a peer-reviewed publication in this area.

When she found out that she was nominated for 2 awards at the Hollywood Dreamz International Film Festival in Las Vegas - for Best Female Director of a Feature Film and Best Political Statement Film, she was happy to be in the same categories with filmmakers who have a strong reputation in the film industry. Their films are mostly backed by investors with larger budgets, while she has been spending her personal savings to produce her passion projects. Winning a film award at this highly competitive festival was not likely, she reasoned.

“At the award ceremony, just before they announced the winner in the Political Statement Film category, my husband told me that he believed that I would win, as I did at the 2016 Action on Film International Film Festival for another anti-bias feature film of mine, LGBT UNITED. I told him not to be disappointed if this would not happen, as I had watched some of the other filmmakers’ movies and was highly impressed. The quality of many of these independent films was excellent, and several of them were of studio quality. It was a great honor just to be nominated next to those film industry professionals, but I really did not expect to win. I was surprised when I was announced as the winner and called to give a speech at the podium. I will have great memories of this moment for a long time, and I will continue doing my best to make impactful social cause feature films that could positively influence their viewers,” concluded Dr. Luciana.