Professor and filmmaker Dr. Luciana Lagana presents at WPA her research findings on the reduction of homophobia after young viewers watched her anti-bias film LGBT UNITED 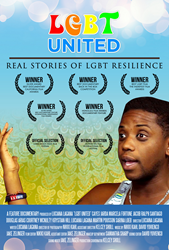 There is certainly a need to develop and test original documentaries to hopefully reduce biases against discriminated minorities.

The movie LGBT UNITED -- created, hosted, directed and produced by Dr. Luciana Lagana, a California State University Northridge (CSUN) professor and NIH-sponsored researcher – was tested experimentally at CSUN with the intent to increase empathy towards LGBT individuals and reduce homophobia in those who watched it. Dr. Luciana presented her preliminary findings in this area at the 97th Annual Convention of the Western Psychological Association, in Sacramento, California. In her study, conducted in collaboration with CSUN former graduate student, Kelcey Sholl, she documented the reduction in homophobia among individuals who watched her film. LGBT UNITED has won several film festival awards, including the Best Political Statement Movie Award at the 2016 Action on Film International Film Festival and the California Endowment Special Sons and Brothers Award for positive and balanced depictions of young men of color at the 2016 Long Beach Indie Film Festival.

(from the WPA poster presentation): The purpose of this randomized controlled study was to use an original documentary to attempt to enhance empathic feelings, knowledge, and attitudes towards LGBT individuals. To our knowledge, no published literature is available on the effects of watching a documentary on college students’ empathy, attitudes, and knowledge regarding the LGBT population. Attempting to fill a gap in the available literature on whether watching a movie could reduce bias against this population, we tested the potential anti-bias effect of a 90 minute award-winning documentary produced by the second author, titled “LGBT United”. It features the personal stories of five ethnically diverse self-identifying LGBT individuals - on topics such as coming out, family rejection, harassment, micro-aggression and overt aggression, as well as acceptance and support. We predicted that, after viewing this documentary, young heterosexual college students who watched our film would improve their scores on LGBT-related knowledge, as well as report higher empathy and more positive attitudes towards LGBT individuals. In line with prior research findings, we also predicted that, at baseline, those who expressed higher levels of religiosity would have more negative attitudes as well as less empathy and knowledge regarding LGBT individuals. A total of 97 ethnically diverse students (22 men and 75 women), who were enrolled in an introductory psychology course at CSUN, participated in this research for course credit. Fifty-two participants, 41 females and 11 males, randomly assigned to the treatment group, viewed the 90-minute LGBT film. Forty-five participants, 34 females and 11 males, viewed a documentary of the same length about the parks of New Zealand (i.e., the control group). Participants in both groups filled out: 1) at baseline only, a short demographic list; 2) both pre- and post-test, surveys to quantify their attitudes, empathy, and knowledge about LGBT individuals. Results showed that, at baseline, students with higher levels of religiosity held significantly more negative attitudes towards LGBT individuals and had less knowledge about them. We conducted paired samples t-tests; participants’ homophobia scores in the experimental group decreased significantly from pre-test (M = 62.75, SD = 18.27) to post-test (M = 59.67, SD = 19.59), t(51) = 3.01, p < .004. As hypothesized, there were no significant changes within the control group.

Dr. Luciana is currently running a second experiment, in order to test whether the reduction in homophobia seen in her first study will be replicated in the new investigation. She will also test whether empathy towards the LGBT population will improve and shared that, “my research team is working hard to collect the data for this second study. We hope to achieve positive anti-bias results, as we found in our preliminary study, as well as positive changes in empathy. There is certainly a need to develop and test original documentaries to hopefully reduce biases against discriminated minorities.”

Luciana Lagana is a caring clinical and experimental psychologist. She is also a professor of psychology, gerontology, women’s health, and sexuality at CSUN, where she teaches classes and mentors many undergraduate and graduate students. Additionally, since 2002, she has been conducting government-funded research at CSUN on the physical, psychological, sexual, and social health of ethnically diverse, primarily low-income older women. Since 2006, she has also been pursuing her creative endeavors by studying acting, TV and radio hosting, screenwriting, directing, and producing in Los Angeles. She has over 50 IMDb credits for hosting and acting in many independent feature films, TV pilots, and web series, as well as several credits for her award-winning acting, screenwriting, directing, and producing. She is the writer/lead actor/director/producer of the 2014 award-winning satirical web series INTIMATE TEMP AGENCY on helping young people with special needs find employment, which won Best Trailer at the 2015 Hollywood Reel Independent Film Festival, among other awards. Her 2014 DR. LUCIANA SHOW – AGING AND FALLING web series won numerous awards, including Best Educational Show at the 2015 WorldFest-Houston International Film Festival. Within the past three years, her TV pilot DR. LUCIANA ON AGING AND FALLING fared well on the film festival circuit; she also wrote, hosted, directed, and produced three award-winning social impact feature documentaries, LGBT UNITED, UNDERSTANDING PAIN IN OLDER AGE, and AGING AND FALLING.