Privately-owned and industry-leading automotive group to reward race fans for brand engagements through exclusive offers, incentives, and major giveaways – including VIP all-access tickets to the Chicago Street Race. The campaign will launch using the #LiveZeiglerFast hashtag in partnership with Live Fast Motorsports and Josh Bilicki for the 2023 NASCAR Cup Series season. Besides the Chicago Street Race giveaway, fans will have various opportunities to win VIP passes for Circuit of the Americas and the Charlotte ROVAL; as well as Bilicki meet-and-greets, swag, and more. 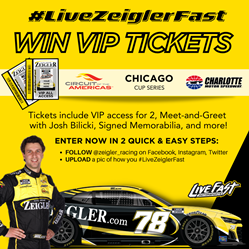 Our fans are the most important element of our sport... Most fans see the action on track but do not have the chance to see what happens behind the scenes. Thanks to Zeigler, we have the opportunity to share this unique experience with a few very lucky individuals!

Zeigler Auto Group today announced its season-long #LiveZeiglerFast fan engagement initiative in partnership with Live Fast Motorsports and Josh Bilicki. The major giveaway for the campaign will be two VIP tickets to the highly coveted Chicago Street Race in July with details on how to enter to be released at a later date.

"Our fans are the most important element of our sport and without them, we would not be racing on the weekends. Most fans see the action on track but do not have the chance to see what happens behind the scenes. Thanks to Zeigler, we have the opportunity to share this unique experience with a few very lucky individuals!,” said Bilicki who will be behind the wheel of Live Fast Motorsports’ flagship No. 78 Camaro after Zeigler announced its 2023 multi-race partnership with the driver and team.

Starting today, fans can enter for a chance to win two all-access VIP passes for Zeigler’s upcoming 2023 NASCAR Cup Series debut race on Sunday, March 26 at the Circuit of the Americas (COTA).

The contest, now open, will run through Saturday, February 28 at 5:00 p.m. EST. Additional information and contest rules can be found at zeiglerracing.com/livezeiglerfast/

"Being able to partner with Zeigler Auto Group and give back to our fans is an opportunity we are really excited about,” said co-owner of Live Fast Motorsports, Matt Tifft. “Going to experience a NASCAR race live and in a VIP fashion is an experience people never forget.”

Besides VIP tickets to the upcoming Circuit of the Americas race in March and the widely-coveted Chicago street race in July, the 2023, the #LiveZeiglerFast Fan Engagement Campaign will also include VIP tickets to Charlotte ROVAL in October. Winners for these three major races will receive VIP access for two guests, signed memorabilia, an in-person meet-and-greet with Bilicki and more.

Other opportunities to win all season-long will include exclusive swag, special offers and incentives, and virtual meet-and-greets with Bilicki, and more.

“NASCAR fans are some of the most passionate sports fans out there, which is exactly why we entered the world of NASCAR sponsorship to begin with,” said Aaron Zeigler, president and owner of Zeigler Auto Group, a Glassdoor’s 100 Best Places to Work award-winning company.

“We’re thrilled about our 2023 NASCAR Cup Series partnership with Josh and Live Fast Motorsports, and look forward to having the opportunity to interact with race fans on a much closer level than we ever have before.”

Zeigler’s Driving Vision Podcast interviewed Bilicki, and Live Fast Motorsports owners Tiff and BJ McLeod, to announce the Live Zeigler Fast VIP Ticket campaign. Podcast host and Zeigler COO Sam D’Arc discussed with Team Live Fast and the No. 78 driver what it is like having VIP access to a race and how close to the action fans will be. “You will feel like you are part of the team, as you feel, hear, and see what is happening right in front of you.” They also share a few examples of what #LiveZeiglerFast looks like in NASCAR.

About Zeigler Auto Group
Zeigler Automotive Group is one of the largest privately-owned dealer groups in the U.S. with 78 franchises across 35 locations in Wisconsin, Illinois, Indiana, and Michigan. Vehicle brands represented include all of the domestic and the majority of the imported manufacturers.

Founded in 1975, the organization employs over 2,300 people, ranking among the top 1% of automotive dealers in the nation with estimated annual sales of $2.2 billion for 2022. The family-owned and operated company is well known for its commitment to both customer service and employee satisfaction. Zeigler is regularly recognized as one of the Best and Brightest Companies to Work for in the Nation, also earning similar accolades in Wisconsin, Chicago, and Michigan.