The story of a world, where an exceptional young man named Tag has an incredible gift making him man’s only hope against an impending vicious Alien onslaught has been brought to life in a new scifi audiobook by SciFi Publishing. 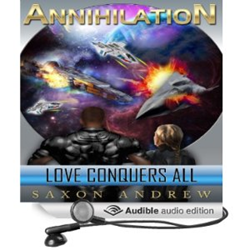 I was amazed at Saxon's beautiful re-creation of some of the best Golden Age SF.

About Annihilation: Love Conquers All
Annihilation: Love Conquers All offers humor and a tale of enduring love against the backdrop of galactic war on a grand scale. Tag, an exceptional young human living in Central City on the planet Earth, tries to keep his powerful, one-of-a-kind skills undetected by leading an ordinary life and staying under the radar. But one day, on the way home from school, Tag's compassion leads him to make a decision that alters the course of his life - and history.

The Alliance of Worlds, which includes Earth as a ruled non-member, has decided that humans are to be annihilated as an example to anyone who discovers an ancient alien technology, even though there is no proof against them. The Alliance thinks fifty thousand warships can do the job. Unfortunately, the humans are not cooperating with their plan and one young human who has fallen in love will change everything...

In this epic story, author Saxon Andrew takes us into the future and the lives of human and nonhuman characters alike. Along with a hearty dose of battles and spaceships, this is a story that offers humor and a tale of enduring love against the backdrop of galactic war on a grand scale.

About the Author
Saxon Andrew decided to sit down one day about three years ago and write a science fiction story. He's loved science fiction his entire life and has read many books from the great masters that have shaped his view of the world and cosmos. His wife urged him to give it a go and publish the books he had written; she felt he was a great story teller and that others might enjoy his rather over active imagination. The first book was Annihilation - Love Conquers All. After he allowed friends to read them and the response was overwhelming. He decided to publish them on Amazon Kindle.

Saxon found out that there were thousands that enjoyed his books and bought all three of the first trilogy making all three books best sellers on Amazon. His intent is to entertain and produce a story that keeps the reader turning pages. He writes so that anyone can enjoy the story. He keeps it clean so that parents won't have to worry about their children reading his books.

Saxon Andrew is the number one international bestselling author of the Annihilation Series, Lens of Time, and Star Chase series. He lives in Tampa, Florida with his wife and has thirty books published on Amazon Kindle. He is ranked as one of the top thirty science fiction authors in America.

About Sci-Fi Publishing
Sci-Fi Publishing enables authors to bring their work to life, creating powerful audiobooks for Sci-Fi fans. We partner with authors from audiobook production to marketing so they can continue to focus on their passion, creating new and amazing worlds.