"Not Easy Being Green," the second in Susy Gage's lab-lit series from Bitingduck Press, explores timely issues in biomedical research. From fraud to untested therapies to carelessness with hot agents, the book takes the reader on an insider's tour of a high-pressure bio lab. 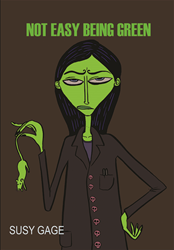 Most people, even scientists, have a hard time believing that viruses are real

Smallpox virus found sitting in a corner. An infected mouse sending researchers scurrying. Live influenza sent through the mail. Incident after incident has prompted the CDC to shutter several of its labs and conduct an investigation. Whether these events happen by ignorance, malice, or just plain sloppiness, it's hard for the general public to understand how such things are possible.

In Susy Gage's upcoming novel, "Not Easy Being Green" (Bitingduck Press 2015), the reader is taken through a whirlwind ride of escaped viruses and panic when a poorly understood biological agent seems to be leaking out of its containment lab. A practicing scientist, the author based all the events of the fictional story on real observations and attitudes. "I honestly don't think most people, even scientists, genuinely believe that viruses are real," the author explains. In the pressure to get results, publish, and treat patients, safety regulations often simply fall by the wayside. And when something goes wrong, those closest to the experiments are often the last to recognize the problem.

The book started with an exploration of research fraud and unapproved underground treatments. People desperate to slow aging, cure cancer, or fix the brain and spinal cord have resorted to paying tens of thousands of dollars for stem cell injections and other untested remedies. In one study in Portugal, a quadriplegic grew a nose on her spine after stem-cell treatments. Efforts to shut clinics meet with resistance from the patients, who often have little to lose. In "Not Easy Being Green," the researchers' investigations lead them from the virus lab to a clinic in Mexico, where the rich and gullible are promised miracle cures.

"Not Easy Being Green" is scheduled for release on March 1, 2015; it is currently available to professional readers and reviewers on NetGalley. The science behind both the books is detailed on the author's website.

Bitingduck Press is an independent publisher that brings the quirky, ego-driven, and sometimes corrupt world of science to its readers. Publishing 6-8 titles per year, the press is currently accepting manuscripts for its 2015 Spring and Fall catalogs in a wide range of genres. The theme for Spring 2015 is “Hard Science Fiction,” and will feature a time-travel romance (Bonnie Rozanski's "The Mindtraveler") and a young adult sci-fi adventure by Bill Bunn, "Kill Shot," along with several non-fiction titles.