Holly Spears releases her first country EP, “Boots and Bling,” which is available now at iTunes. The singer-songwriter is currently in Texas filming the upcoming faith-based film, “Nail 32.” 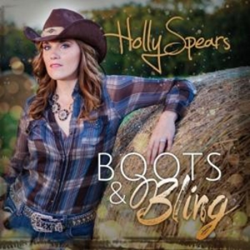 Holly Spears, "Boots and Bling" (Girl on a Mission Music)

For so many years, I rejected where I grew up, chasing someone I wasn’t. Now, I am learning to be at home in my own skin and to embrace all the parts of me - the boots and the bling.

Singer-songwriter Holly Spears is pleased to announce the release of her first country EP, “Boots and Bling,” which is available now at iTunes and http://www.hollyspears.com. The 8-song EP from Girl on a Mission Music is the follow-up to her 2014 Christian music EP, “Audience of One.”

"’Boots and Bling’ is my attempt to get back to my roots and embrace who I've grown into,” says Spears. "I grew up in a little country town and dared to moved away from it at the young age of 18. I moved five hours away from everything I had ever known in pursuit of a music career. Back then, I couldn't wait to move to the city. Now, I can't wait to live on more property and get more horses. I grew up as a tomboy, and when I moved away, I became more ‘girly.' Today, I’m a good mix of the two.”

As if she wasn’t busy enough with promoting her new album, Spears is currently in Texas filming the upcoming faith-based film, “Nail 32.” Along with Spears, the film stars Brad Johnson (“Always,” “Left Behind”), Lea Penick (“American Hoggers”) and more in an exhilarating and emotional true-life story of an ordinary man from north Texas who served an extraordinary purpose. The film depicts the grueling travels of the rodeo circuit, from the backbreaking bull riding to the musical oasis of the honky-tonks. It portrays both the picturesque culture of the American rancher while dispensing cowboy pride and simplistic life solutions. Just as 32 nails attach the shoes to a horse, “Nail 32” clenches the importance of men being courageous, honorable, and truly God fearing.

Spears wrote five of the songs on “Boots and Bling,” many of which will be featured in the upcoming film. On her new EP, Spears examines her life with songs like “Brothers" and a song about her Grandpa called, “Sunshine.” Says Spears, "My ‘Pap' was the glue that held our family together. I could definitely see Jesus in him, as well as an ornery side, which made everyone love him!”

The EP also includes cover versions of John Denver’s “Country Roads," Paula Cole’s “Where Have All the Cowboys Gone” and the Dixie Chicks hit, “Wide Open Spaces” - which Spears calls the theme song of her teen years.

"For so many years, I rejected where I grew up, chasing someone I wasn’t,” says Spears. "Now, I am learning to be at home in my own skin and to embrace all the parts of me - the boots and the bling. My hope is that this album inspires everyone to be proud of who they are and where they come from and to know to their very core that they always belong."