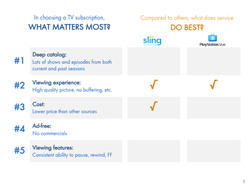 Virtual MVPDs (including the just-launched Hulu Live TV service) were developed as a less-expensive alternative to traditional MVPD subscriptions. But over the time these services have been available, there’s been no appreciable drop in the number of viewers who subscribe to pay TV.

Why haven’t Virtual MVPDs made more of a dent in pay TV subscription?

According to Hub’s annual “What’s TV Worth” study, 88% of viewers with broadband have a pay TV subscription—statistically unchanged from 90% in 2014. The two virtual MVPDs that have been around the longest—Sling TV and PlayStation Vue—each have penetration levels of only 6%.

1. Depth of catalog: A large volume of shows and episodes from both current and past seasons
2. Viewing experience: Picture quality, lack of buffering, etc.
3. Cost: Lower price than other sources
4. Ad-Free: No commercials
5. Viewing features: Ability to pause, rewind, fast forward
6. DVR: Ability to record shows to watch later

Then viewers were asked to rate the strengths of the Virtual MVPDs they use, on the same list of attributes. Few of the top viewer needs were also seen as strengths of, for example, Sling TV or PlayStation Vue.

“TV pundits have been predicting the demise of traditional MVPD service from the moment inexpensive online alternatives were introduced,” said Peter Fondulas from Hub, who co-authored the study. “But that still hasn’t happened, because competitors haven’t matched pay TV’s trump cards: the widest variety of current content, the ability to easily record that content and watch at a time that’s convenient, and the ability to fast forward through ads with their DVR.”

“Part of the big appeal of platforms like Netflix is that they are the ‘anti-TV’. Virtual MVPDs are different from pay TV, but in a more incremental way: they’re still bundles of networks. And their gaps in content or features are enough to keep many consumers from switching from pay TV, even though the price is lower,” said Jon Giegengack, co-author at Hub.

About this Research
“What’s TV Worth” was conducted among 2,026 US consumers with broadband and who watch at least 5 hours of TV per week. The data was collected in April 2017. An infographic and excerpt of the report are available as a free download from Hub Entertainment Research.

About Hub Entertainment Research
Hub Entertainment Research is a market-research firm with deep expertise in television, movies, gaming, music, publishing, and sports: anywhere that entertainment and new technology overlap. In the television industry, Hub analysts work with MVPDs, networks, content creators, and digital distributors. Our job is to help our clients negotiate new risks, act upon emerging opportunities, and reveal the clearest paths to success in a changing marketplace. For more information, please visit us at http://www.hubresearchllc.com.