Angel Myers's New Book "The Governor's Daughter" Is the Story of Woman Who Gave up Her Lifestyle of Luxury to Marry for Love, and Suffers the Wrath of Her Ex-Fiancé

Recent release “The Governor's Daughter” from Page Publishing author Angel Myers is about a wealthy heiress, Amanda, who forfeits her wealth after finding true love. After losing her husband, Amanda must fight against those seeking revenge against her on her own. 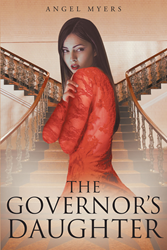 Angel Myers, an emigrant from the Philippines, who now lives in the United States, has completed her new book “The Governor's Daughter”: a gripping and potent tale of a love torn apart by jaded individuals bent on revenge.

According to Myers, “(I) was born in the Philippines, graduated college at Christian College of Medicine, with a bachelor of science in medical technology degree. (I am) the third among five siblings. (My) parents live in the rural areas of Manila, Philippines. (I) worked as a laboratory analyst in one of the largest food corporations in the Philippines before migrating to the United States. (I) now live in Jacksonville, FL, and (I am) married.”

Amanda’s father is a very wealthy Spanish businessman who emigrated from Spain. Her father became powerful in politics, as he became the governor in the city. She was the one and only child, with five personal attendants. She grew up surrounded with luxury, a woman who was born with privilege, and part of the wealthiest families in the city. However, she sacrificed all of her wealth to be with her true love.

She was born in a mansion, but she embraced a simple life for a love that was the test of her life. Then one day, her ex-fiancé took revenge and kidnapped her husband. Amanda was still grieving the death of her father, so how would she tell her children that their father would never come home again? Then one day, a group of men drove them out of the mansion. All the wealth that her father had devised to her was gone. From riches to rags, now all she had were her four children. Her heart was shattered. She began to question why all this tragedy was falling on her at once and how was she going to make things right when her ex-fiancé was now a powerful political figure.

Readers who wish to experience this gripping work can purchase “The Governor's Daughter” at bookstores everywhere, or online at the Apple iTunes store, Amazon, Kobo, Google Play or Barnes and Noble.