Recent release “Ken's Punny Jokes and Riddles” from Page Publishing author Ken Nash is the result of others’ encouragement to write down his jokes for all to enjoy. He warns they may not be everyone’s taste, but they are meant in jest and not to be taken too seriously. 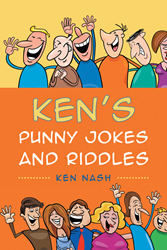 Ken Nash, a lifelong writer and former board game developer, has completed his new book “Ken's Punny Jokes and Riddles”: an irreverent collection of jokes and riddles that will provide hours of entertainment for the reader.

According to Nash, “My book of jokes and riddles could be described as debaucherously spicy and aren’t for everyone. But I assume that in this day and age, such qualities are superfluous as long as the literature is creative and artistic. My inspiration for the book began after getting into a series of jokes and riddles matches with a co-worker at a restaurant where I’ve worked. Everyone there encouraged me to write it all down on paper and create a book. After twelve years of compiling jokes and riddles, with much time on my hands, I’ve finally formed a book for publication.”

Published by New York City-based Page Publishing, Ken Nash’s uproariously funny collection of jokes is the result of years of work compiling jokes and riddles, so that they can be enjoyed by everyone.
Nash has lived in Hawaii for approximately forty-six years now, and has written both fiction and nonfiction literature as an avocation since 1977 at the age of eleven. After forty years, he is finally writing to turn over a profit. In the 1990’s, he tried to market a board game product called Fastlane, but was not successful.
Now with his book of jokes and riddles on the precipice of being published, he is finally making a mark in life at the age of fifty-one. The fact that he is getting a book published at all could be considered remarkable given the fact that he only got as far as a high school education. His book of jokes and riddles has been in the works for twelve years, since 2004.

Readers who wish to experience this irreverent work can purchase “Ken's Punny Jokes and Riddles” at bookstores everywhere, or online at the Apple iTunes store, Amazon, Kobo, Google Play or Barnes and Noble.