CHRISTAFARI return April 13th with their latest studio album, “Original Love” (Lion of Zion Entertainment) - available now for pre-order at iTunes, with 4 instant tracks available upon purchase. After nearly three decades, CHRISTAFARI is the all-time top selling Gospel Reggae act and continues to be a driving force in world music. 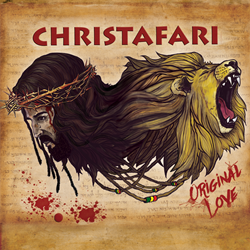 CHRISTAFARI return April 13th with their latest studio album, “Original Love” (Lion of Zion Entertainment) - available now for pre-order at iTunes, with 4 instant tracks available upon purchase. After nearly three decades, CHRISTAFARI is the all-time top selling Gospel Reggae act and continues to be a driving force in world music. Their last 6 albums have debuted at #1 on the Billboard Reggae Chart. But the band considers themselves to be more than just musicians, but rather “musicianaries” (musical missionaries), spreading the message of hope and salvation globally to approximately 20 countries per year.

CHRISTAFARI was founded in 1989 by Pastor Mark Mohr, who strayed from his spiritual upbringing in his teenage years and turned to drugs and alcohol. After running away from home, living on the streets, and hitting rock-bottom, he had an undeniable encounter with God that drastically transformed his world. Just two weeks later, CHRISTAFARI was birthed at a camp talent show, when a friend said to Mohr, “So you’re not a Rastafarian anymore; you’re a Christafarian.” And the name stuck! While their name may just sound like a play on words, in Biblical Greek it stands for a group of people who bear or represent the name of Christ. “At that time, the best advice I was given was to go to Bible College so I could be theologically and doctrinally sound,” says Mohr, who attended BIOLA University, taking classes that emphasized pastoral studies and missions. During his college years, CHRISTAFARI continued to take shape as Mohr wrote songs for the band’s first three albums.

In 1999, after recording two albums with Gotee Records under the tutelage of multi-platinum recording artist TobyMac, Mohr branched out and founded his own record company, Lion of Zion Entertainment, with the goal of “reaching the world through world music.”

CHRISTAFARI has performed in 46 states, over 74 nations, at two Olympic Games and even for a Presidential Inauguration in Washington D.C. The band has performed at most major reggae and Gospel/CCM festivals with the top artists in the genres, and they’ve had the privilege of performing at many of the country’s most prestigious venues such as L.A.’s Greek Theater, Dodger Stadium and the steps of the United States Capitol before a crowd of 500,000. The band has been featured on The 700 Club, CNN, MTV, MTV Brazil, ABC, TBN, JUCE TV, BET, TBS and many more. Their music is even featured in the current curriculum taught at Carnegie Hall.

The band’s YouTube channel sees well over one million views each month. “Aside from touring,” says Mohr, “our greatest platform to reach the world is YouTube, so we’re doing our best to maximize it with the few resources that we have.” Over the last few years, CHRISTAFARI has released roughly one music video per month through their Rank and File Film Co.

It was never the band’s intention to take on a missionary role, but as often happens, God had other plans. “The funny thing is that one of my first prayers to the Lord after coming to Christ was, ‘Please don’t make me a missionary in the jungle in some Third World country,’” recalls Mohr, who now thanks the Lord for not answering that prayer. After visiting places like Africa, Central and South America, and some of the most remote islands on earth, it became clear to the band that these were the types of places that God wanted them to invest their time and talents in. Their mission is simple: “To reach the lost at any cost and make disciples of every nation.”

So they became full-time musical missionaries – willing to travel to the ends of the earth in an effort to preach the Gospel through the universal language of music to those who could never afford them in conventional terms. Each of the members in CHRISTAFARI has the same mission and vision, a commitment that requires tremendous sacrifice and discomfort. But this is right where they believe the Lord has called them. Seeing lives changed across the globe makes it entirely worth their while, and the results have been astonishing. In 2016-2017, the band saw over 231,000 decisions for Christ at their outreach events. They are well on their way towards their goal of seeing one million decisions for Christ within the next decade.

Not only does the band travel the world proclaiming the Good News of Jesus Christ through reggae music, but they’ve also set out to be the hands and feet of Jesus. They try to find and fill a need in each country they visit, such as outreaches in trash cities and slums, serving at orphanages, feeding the hungry, clothing the poor and ministering to those whom Jesus called “the least of these.”