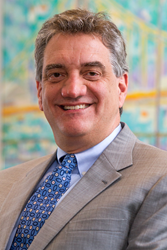 Elliot Dinkin, President and CEO of Cowden Associates, discusses the effects of the federal tax bill on nonprofits.

“The time to take action is now,” said Dinkin. “Nonprofits were already faced with challenges in competing with their for-profit counterparts, and the new tax law didn’t help.”

Compensation for senior executives of not-for-profit organizations has been growing steadily for several years—as has the scrutiny it receives. A widely quoted study reported that tax-exempt organizations in the U.S. provided seven-figure compensation to roughly 2,700 employees in 2014, up one-third from three years earlier. Meanwhile, charities received federal tax benefits worth upward of $100 billion per year.1 “This is a problem,” said Elliot Dinkin, President and CEO of Cowden Associates, a specialist in risk management and compensation plans. “When unreasonable compensation levels for executives of nonprofit organizations are brought to light in the news, the result can be a public relations nightmare, reduced contributions to the charity, and executive turnover in the organization.”

Despite the risks, Dinkin noted, the upward trend continues. The Chronicle of Higher Education reported last summer that the nation’s three highest-paid public university leaders had each taken home more than $1 million in the preceding fiscal year, and that seven had earned more than $700,000. Universities, said the report, are increasingly paying these salaries with foundation or donation money; the chancellor of the University of Texas, for example, is paid entirely from donations. A leading academic who researches university leadership performance referred to this as a “sleight of hand,” saying public universities claim to lack funding for tenured faculty while awarding large paychecks to their presidents.2

A perceived dissonance between a nonprofit’s mission and what it pays its leadership can have serious consequences. In 2016, a local newspaper investigation revealed that most of Goodwill Omaha’s thrift-store profits were going to administrative overhead, rather than to the organization’s mission of helping the disabled. Donations plummeted; a new CEO was recruited, and over the course of the following year Goodwill Omaha reduced its number of executives from 19 to nine, reduced the number of employees receiving more than $100,000 per year from 14 to three, and cut the CEO’s base pay nearly in half. The pubic reacted favorably; by April of 2018, contributions were nearly back to the level they had attained before the scandal broke.3

Meanwhile, the 2017 federal tax bill, which imposes a 21% excise tax on nonprofit employers for salaries over $1 million, seems certain to increase pressure on nonprofits to moderate—or more clearly explain—their pay practices. In an environment in which every dollar counts, nonprofit boards will need to justify that it is worthwhile to pay the additional excise tax rather than cut back on salary.4

Industry experts agree that nonprofits will be helped both in the search for talent and the battle for public perception by establishing appropriate levels of compensation. Factors the hiring authority, usually the board of directors, should take into consideration include:

“The time to take action is now,” said Dinkin. “Nonprofits were already faced with challenges in competing with their for-profit counterparts, and the new tax law didn’t help.”

Rather than compete head-on with salaries and bonuses, nonprofits may want to develop more attractive non-salary related opportunities having to do with time and lifestyle, along with other options. Dinkin contends that it doesn’t have to be a win-lose proposition. There are effective ways to strike a balance between what’s reasonable and what’s necessary in the competition for talent.

About Cowden Associates:
Cowden Associates, Inc. headquartered in Pittsburgh, PA, was created in 2001 by the merger of Halliwell and Associates and MMC&P Spectrum Benefits, which was founded by Jere Cowden in 1986. Currently led by President & CEO Elliot Dinkin, Cowden Associates specializes in helping corporate clients find the best solutions, both for the enterprise and for its employees, in regard to compensation, healthcare benefits, retirement and pension issues, and Taft-Hartley fund consulting. Winning Workplaces and the Wall Street Journal have recognized Cowden Associates as a “Top Small Workplace,” a lifetime designation awarded to executives for their ability to build and lead savvy organizations. For more information visit http://www.CowdenAssociates.com