"View From the Podium" is a memoir of Edward Judd's nearly 45 years as a music teacher. Judd relates his experiences in multiple facets of music education. 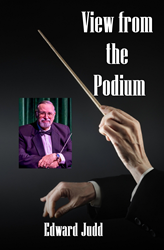 View from the Podium is a delight! - Explore Authors Magazine

When music teacher Edward Judd was looking for a way to celebrate his 40th year in music education, he opted to write a series of reflections on some of his most memorable moments as an educator of young musicians. “I had no idea it would lead to a book,” said Judd. “I just wanted to share some of my most treasured memories over my 40 years with students.” On the evening of the Spring Concert at his school, Judd posted his reflections in the school auditorium lobby. “The response was very positive,” said Judd “and several people suggested I put the stories in a book. The whole project took a few years.”

Although Judd outlines his success with many groups, he also narrates many struggles he has encountered in trying to formulate a music program that will foster student success. “At times it has been difficult,” Judd said. “Many times I have encountered school administrators that have said all the right things in supporting a school music program, but have not followed through with helpful action.”

“Although I changed the names of some of the people I worked with,” he said, “I do include groups I’ve taught and schools I’ve taught in without changing those names.” Judd’s experiences took him all over the New England states, and in a wide variety of settings, including teaching music in the elementary grades as well as middle school. He has taught in public high schools as well as a private academy, and has been a college band director.

View From the Podium is on sale now at Amazon, Barnes and Noble, and many other fine retailers.