Recent release “Death’s Diary” from Page Publishing author Alex Snider features a Grim Reaper in love, and the threat his love poses to the celestial beings he calls friend—and foe. 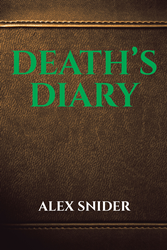 Alex Snider, a West Virginia native who is passionate about video games and writing, has completed his new book “Death’s Diary”: the imaginative debut novel that follows the Grim Reaper as his unexpected love for a human poses dire consequences for the world of angels and gods.

“I was never much of a reader, but my love of video games and movies was what led me to write,” Alex Snider said when asked what inspired him to create this novel. “I had a million ideas for new video games, but I figured the best way to get my ideas and stories out there would be to write them.”

Published by Page Publishing, Alex Snider’s gripping tale begins at the earliest dawn of mankind, in the garden of Eden, but in his world, there is no one ruler; instead, the heavens are ruled by Ra, Zeus, and the Judaeo-Christian God. As humanity progresses, the divide between those in heaven and hell, and those on Earth widens despite the necessary interactions—the Four Horsemen of the Apocalypse, the Seven Deadly Sins, and other beings, such as the protagonist, Death—have with each other. But when the Grim Reaper is carrying out a routine death, he meets and falls in love with a human being, a young human doctor, and their love can potentially undo the balance in the relationship between supernatural and human.

As punishment for revealing his true identity to her, Death’s new love is taken and held by Lucifer. To free his beloved, Death must face off against the demons of hell and the archangels from heaven.

Readers who wish to explore this mystic thriller can purchase“Death’s Diary” at bookstores everywhere, or online at the Apple iTunes Store, Amazon, Google Play, or Barnes and Noble.