Author Andrew Harris’s book “Revolution! It Ain’t No New Thing” is a thoughtful thesis on political evolution in the United States, from its founding to the present

Recent release “Revolution! It Ain’t No New Thing: America’s Next Political Consciousness Evolution” from Page Publishing author Andrew Harris is both an illuminating discussion of political evolution and revolution and an exploration of the work of the Founders in creating what they intended to be a living framework for an enduring democracy. 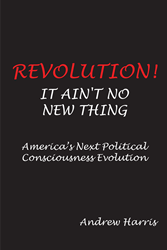 Andrew Harris, a corporate executive and consultant for several Fortune 500 companies who has authored three programs in leadership and career development and received several prestigious awards from federal and state government agencies and private corporations, has completed his new book “Revolution! It Ain’t No New Thing: America’s Next Political Consciousness Evolution”: a compelling argument for the progress of the American experiment toward a more perfect union.

“Revolution: It Ain’t No New Thing” is an extraordinarily well-written exposé uncovering promising possibilities of another era of American generational consciousness evolution.

Using analogical arguments to support his bold new assertions and predictions, Dr. Harris examines in great historical detail the evolution of political consciousness and how it has evolved over many millennia. In the prologue, he defines political consciousness as being both individual and group awareness derived from a common set of beliefs and values or value regimes. He further details how ancient civilization’s political societies evolved, dating back to Babylon, Prussia, Egypt, and the Middle East, to the founding of America’s democratic republic and today’s societal efforts toward a more perfect union.

“Revolution: It Ain’t No New Thing” exposes an unambiguous contrast between revolution and evolution. Whereas an act of revolution always ushers in a complete political regime change, evolution involves a modification of an existing political regime by changing its political and civic polity. In order to drive home this point, Andrew tells his personal story of being politically radicalized as a young Black boy in the suburbs of New York City during the civil rights movement.

Readers who wish to experience this engaging work can purchase “Revolution! It Ain’t No New Thing: America’s Next Political Consciousness Evolution” at bookstores everywhere, or online at the Apple iTunes Store, Amazon, Google Play, or Barnes and Noble.