Recent release “The Timekeeper’s Daughter” from Page Publishing author Dale Peskin is a spellbinding novel based in part on his own reporting for his hometown newspaper, “The Youngstown Vindicator”, which disclosed mismanagement at Youngstown Sheet & Tube Co. and collusion with the Antitrust Division of the US Justice Department and led to the loss of more than 5,000 steelworker jobs at Sheet & Tube’s Campbell Works in what was at the time the largest plant closing in US history and the catalyst for the massive economic crisis that followed- a moment viewed as the end of the industrial era. 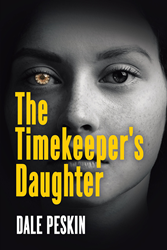 Dale Peskin, a widely honored media innovator, news executive, editor, and pioneering journalist who lives with his wife, Mary, in Northern Virginia, where they are avid golfers, travelers, art collectors, and grandparents, has published his new book “The Timekeeper’s Daughter”: a gripping and potent literary debut inspired by the seismic shock of the day industrial America died, in Youngstown, Ohio, and beyond.

Such a small murder so long ago should be forgiven in a place such as Youngstown—unless you understand the importance of keeping time.

LouAnn Epperson is a pioneering computer scientist who is poised to deliver the promise of the dawning Information Age. But the entrenched sexists who control science, academia, technology, government, and business dismiss her because of her gender, her background, and her abilities, which are lost on them.

Instead, LouAnn is guided by the wisdom of her father, the “timekeeper” at a steel mill in Youngstown, Ohio. LouAnn confronts the impact of time and technology as she leaves her Caltech lab to deal with her father’s mysterious death. Returning to her industrial hometown, she reunites with her college boyfriend, an obituary reporter at the local newspaper. Together, they uncover a deadly secret: The Timekeeper is a whistleblower killed for information that would scuttle a consequential merger sanctioned by the US government. Their story sweeps across events that decimate communities such as Youngstown and reset global economies at a turbulent transition in time.

In a masterful debut novel, journalist Dale Peskin weaves original events from a flashpoint at the end of the industrial era and the beginning of the Computer Age into a human story that considers what has been lost—and what replaces it—in the sweeping social, economic, political, and technological upheavals that now play out in today’s headlines.

Published by Page Publishing, Dale Peskin’s engrossing book is a riveting drama based on the actual events precipitating one of the greatest socioeconomic shocks in American history,

Readers who wish to experience this engaging work can purchase “The Timekeeper’s Daughter” at bookstores everywhere, or online at the Apple iTunes store, Amazon, Google Play, or Barnes and Noble.