Recent release “Patty’s Knight: A Novel” from Page Publishing author Duke Dupree is a compelling family portrait charting the lives and fortunes of three generations of Hendersons, who attained success and wealth in industry and oil throughout the twentieth century. Patricia Henderson, a gifted young woman with a bright future forever changed by a reckless driver whose actions left her paralyzed from the waist down. The love of an equally talented man enriches both of their lives, and keeps the pages turning until the dramatic conclusion. 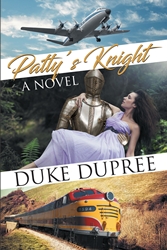 Duke Dupree is a successful businessman who left his family’s Arkansas farm after his sophomore year in high school, put himself through junior college, University of Virginia, and Duke University for postgraduate studies, volunteered for the US Coast Guard, where he flew all sorts of missions and served as a communications officer, and is now enjoying full retirement. He has published his new book “Patty’s Knight: A Novel”: a gripping tale of true love and determination in a successful Texas family.

Patricia Henderson became a very talented pianist. She was taught by her maternal grandmother, who was a concert pianist. Patricia also became rich since her paternal grandfather, who made it big in the Texas oil industry, endowed her with a generous trust when she turned 21. She became despondent after she was in a horrific automobile accident that left her a paraplegic. Then she met Rick.

John Richard Ducheyene (pronounced du kane), called Rick by all who know him, was born and raised in a Central Texas farming community. He lost his parents at age 15 and was under the guardianship of an uncle who sat Rick up really well financially on his 21st birthday. Rick also took flying lessons his senior year in high school and obtained his pilot's license by the time he graduated. During his college years, he studied the stock market and became a successful investor. One of his electives in college was a music appreciation class and he fell in love with classical music. He enjoyed live concerts and stage plays, especially musicals. It was at a classical music concert that he saw Patricia Henderson.

Rick and Patricia met in a most unique way. From the time they first met, they wanted to see more of each other and began dating. It is interesting how they overcame Patricia's handicap and amazing how they dealt with it. The novel describes their courtship, their ups and downs, and the thrilling sub-plots along the way, leading up to the dramatic climax of the story.

Readers who wish to experience this engaging work can purchase “Patty’s Knight: A Novel” at bookstores everywhere, or online at the Apple iTunes store, Amazon, Google Play, or Barnes and Noble.