Recent release “Bowman’s Travels” from Page Publishing author Evan Harding is a spellbinding adventure recalling the remarkable life of a centenarian who counted Daniel Boone as a friend, was at the vanguard of Lewis and Clark’s Corps of Discovery, and was a true pioneer at the dawn of America. 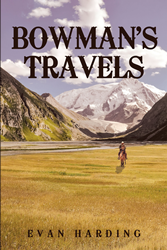 Evan Harding is a California native, father of three grown children, and graduate of the University of California, Berkeley currently residing with his wife in Santa Barbara. He has published his new book “Bowman’s Travels”: a gripping and potent literary debut.

Image a person who defies the norms of longevity of the nineteenth century and who lives to give his firsthand account of many of the great events in American history. He would tell his story to a young family member who comes home from college and suddenly realizes that the old man who showed up at his parents’ house was one of the most amazing heroes in American history.

James Bowman went undetected from American history. The life of James Bowman was both ambiguous and undocumented for he lived a life behind the scenes. His life experiences placed him in the middle of the Lewis and Clark Expedition, the Franciscan mission system, the California gold rush, the Discovery of Seattle, the Civil War, the Indian wars of the Great Plains, and the completion of the transcontinental railroad. James Bowman, during his long lifetime, either knew or had close encounters with Daniel Boone, Meriwether Lewis, Thomas Jefferson, Abraham Lincoln, and General Grenville Dodge; yet little trace of James Bowman exists in the journals of American history.

This novel is a vivid story of the robust and short American history from the Lewis and Clark Expedition and Manifest Destiny to the birth of the Model T and the automobile and is an amazing tale of an American hero whose complete story was never told until now.

Published by Page Publishing, Evan Harding’s engrossing book is a riveting work of historical fiction inspired by the spirit and adventure of the westward pioneers in the early years of the new republic.

Readers who wish to experience this engaging work can purchase “Bowman’s Travels” at bookstores everywhere, or online at the Apple iTunes store, Amazon, Google Play, or Barnes and Noble.