Author J.M. Miller’s new book “Grandpa’s War” is a compelling fictionalization of an American soldier’s experience as a combat engineer during and after the Korean War.

Recent release “Grandpa’s War” from Page Publishing author J.M. Miller is a stirring wartime narrative drawn from his own military service as well as historical documents from close family and friends who served in the Korean War. 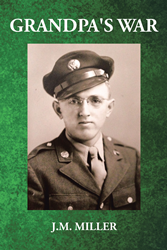 J.M. Miller is an army veteran who served in Operation Enduring Freedom from 2000 to 2008 and whose lifelong interest in the military began during his youth with his grandfather’s pictures and stories from his service in Korea. He has published his new book “Grandpa’s War”: a vivid depiction of the lives- and sacrifices- of servicemembers deployed to Korea during the brutal 1950s-era conflict.

Wars are remembered as dramas, either of stirring victory or shameful defeat. “The Forgotten War” in Korea, depending on who is remembering, has been branded as both. Win or lose, Korea sometimes vanishes within the larger narrative of the Cold War, a memo somewhere near the front of the tale. It also hides behind larger personalities such as General MacArthur, President Truman, or Television. That moment in Korea was the first occasion when Americans were too busy for world events.

“Grandpa’s War” offers a nuanced perspective of the Korean War. The author is a student of war diaries from the First Cavalry, and a friend and relative to their combat engineers. This telling of Korea is not another by-product of great colliding super-powers but, rather, the familiarity of farm kids and city boys who were translating strange orders into gutsy actions. Their instructions, communists, the third world were as foreign to them as the people.

These boys are aging now, and some of them are already gone. On June 25, 2020, the Forgotten War will be seventy years old. The peninsula, today, would seem greatly different to these boys. South Korea, with its burgeoning economy, world-class health care, prestigious education, and Olympics, has escaped its past as a third-world nation. The North, on the other hand, has never flourished. These boys may not have known too much about what they were doing at the time, but for the last seventy years, they’ve had so many confirmations of stirring victory. This novel chooses to never forget these farm kids and city boys even after their war becomes a footnote of history.

Published by Page Publishing, J.M. Miller’s engrossing book is an excellent choice for any avid student of American military history.

Readers who wish to experience this engaging work can purchase “Grandpa’s War” at bookstores everywhere, or online at the Apple iTunes store, Amazon, Google Play, or Barnes and Noble.