Recent release “A Nation’s Keeper: An Alamo Novel” from Page Publishing author James L. Howard is a fast-paced and gripping story of a post-secession America and one man’s quest to protect the new Republic of United Libertarians. Alamo is a former US soldier who dedicates his legendary skills both to the fledgling nation and to exacting revenge on those who murdered his wife and daughters. 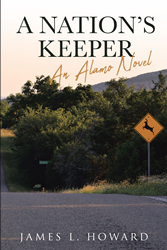 James L. Howard is a twenty-two-year veteran of the US Army who attained the rank of master sergeant before retiring in 2008 yet continued to serve his nation by training military and civilians in Afghanistan, and now resides with Donna, his wife of thirty years, in Copperas Cove, Texas. He has published his latest book “A Nation’s Keeper: An Alamo Novel”: a riveting work of realistic fiction.

James writes, “The United States is collapsing into ruin. Several states have aligned themselves with Texas to form a new nation, the Republic of United Libertarians. The US acts immediately to destabilize and recover the rogue states through espionage and subversion. The RUL answers back by enlisting the service of a select few citizen-soldiers, men who can operate beyond the rule of law to protect the foundling republic from such threats.

Of these enforcers, Alamo is unsurpassed and serves as the governor’s right hand. He travels the republic dispensing justice, often from the barrel of a gun. His notoriety is legend as is the bounty on his head. The US will stop at nothing to finish him, targeting friends, loved ones, and associates in an effort to hurt or compromise him, so his strict policy is to not let anyone close.

A chance encounter with Anna, a beautiful rancher in the Texas Hill country, soon has Alamo reconsidering his staunch beliefs. He has much in common with her as well as the ranch hands who protect her interests, hard men and former soldiers who can recognize a little of themselves in the lone gunman who protects the RUL.

A top operative, Alan Combs, has been ordered to put an end to the continued hindrance of the United States’ schemes. He’s entered the RUL to locate Alamo and either capture or kill him. A game of hunter versus hunter commences, a game that Alamo must win before the woman he’s invited into his life becomes yet another victim of his profession.”

Published by Page Publishing, James L. Howard’s engrossing book is a spellbinding adventure that keeps the pages turning until the stunning conclusion.

Readers who wish to experience this action-packed work can purchase “A Nation’s Keeper: An Alamo Novel” at bookstores everywhere, or online at the Apple iTunes store, Amazon, Google Play, or Barnes and Noble.