Recent release “Something’s Afoot” from Page Publishing author Kipp McKenzie is a fast-paced and humorous novel continuing the adventures of Steve McConnell a high school student navigating a life filled with frenetic teenage issues, as well as Andy, his adopted brother, and Will, their father, who is juggling a myriad of situations at work while trying to parent a boisterous and complicated family. 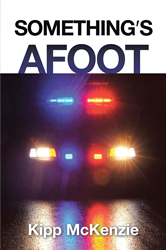 Kipp McKenzie, a father of two grown children and school principal in Payette, Idaho, where he lives with his wife, Emily, has completed his new book “Something’s Afoot”: an engaging sequel to his prior work, “The Fall of Two Moons”, a fictionalized tribute to his own upbringing.

Steve McConnell is back with his entertaining antics! He must navigate his first job, his first car, varsity football, earth science, and his lead role in the school’s musical, Something’s Afoot. Steve must deal with his behavioral shortcomings, his relationship with his peers, and his eccentric family. Steve finds himself in a conundrum as two girls set their eyes on him romantically. He must balance those increasingly complex relationships while he tries to decide which girl is the one for him.

Andy McConnell has Down syndrome. He must find his place in the McConnell family, survive a family vacation, and navigate his relationship with his adoptive father, Will. Andy finds himself promoted to team manager for the Portside High School football squad as he becomes good luck for the superstitious team. His sudden rise in popularity gets him voted onto the homecoming court. Andy must play his role in helping the team win the football league title and homecoming game while he manages his rising expectations to be named homecoming king.

Will McConnell plans an epic family vacation that will go down in infamy. Will also balances his role as the Portside Education Association’s lead negotiator and his relationship with his superintendent and boss. When the teachers go on strike, Will must settle negotiations, save the homecoming game, homecoming dance, and his son’s musical, and pass a school facilities bond. With the weight of the world on Will’s shoulders, he must also save his relationship with Andy, handle his daughter’s dating entanglements, and keep a close eye on Steve’s growing impulsive behaviors.

Something’s Afoot and the center stage is set for a wild ending. Steve’s worlds collide once again in a zany comedy that will make you laugh out loud.

Published by Page Publishing, Kipp McKenzie’s engrossing book is an excellent choice for avid readers of all ages.

Readers who wish to experience this engaging work can purchase “Something’s Afoot” at bookstores everywhere, or online at the Apple iTunes Store, Amazon, Google Play, or Barnes and Noble.