Author Marquita Coleman’s new book “Redemption: The Taste of a Woman’s Rage” is a riveting story following the dramatic career of an impressionable corrections officer

Recent release “Redemption: The Taste of a Woman’s Rage” from Page Publishing author Marquita Coleman is a poignant tale of one woman’s vulnerability, a devastating betrayal, and an unquenchable thirst for vengeance. 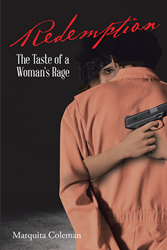 Marquita Coleman, a former corrections officer and mother of one, has published her latest book “Redemption: The Taste of a Woman’s Rage”: a gripping and potent short story probing the limits of human forgiveness as a corrections officer suffers unthinkable treachery at the hands of an inmate.

“Redemption: The Taste of a Woman’s Rage” is based on known life events. It is about a young woman named April who was naive to the rules and regulations as a correctional officer. She was targeted by a very charming inmate named Nathaniel. Nathaniel is the type to lure young vulnerable women who are very self-conscious about themselves. She goes through a breakup with her boyfriend, becoming weak-minded and vulnerable. April eventually falls in love with Nathaniel and they end up becoming sexual with each other.

Unbeknownst to April, Nathaniel has something up his sleeve. It will be a task that will be impossible for her to avoid or get out of. She eventually finds out what he really wants and falls to the level of an inmate. After falling in love with Nathaniel, all hell breaks loose, and she becomes fed up with his antics. She tries to get out the bondage he had her in, but she was not able to because he wouldn’t let her. She then finds out that Nathaniel has another lover. By the end of it all, April becomes full of rage with the intent to seek revenge. She sought redemption, and it all tasted so good.

Published by Page Publishing, Marquita Coleman’s engrossing book is a cautionary tale that keeps the pages turning until the stunning conclusion.

Readers who wish to experience this engaging work can purchase “Redemption: The Taste of a Woman’s Rage” at bookstores everywhere, or online at the Apple iTunes store, Amazon, Google Play, or Barnes and Noble.