Recent release “Doc and JD Houston’s Own Dynamic Duo” from Page Publishing author Michael Egbert is an engagingly written narrative detailing his crime-fighting exploits with his partner along a seven-mile stretch of Telephone Road, a notoriously crime-ridden area in southeast Houston. 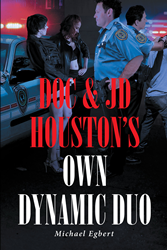 Michael Egbert is a US Navy veteran who served with a Marine recon platoon as a combat photographer who became a law enforcement officer for the Houston Police Department, where he served until his retirement in 2006. He has published his latest book “Doc and JD Houston’s Own Dynamic Duo”: a gripping portrait of the eventful career with his partner, JD.

Michael writes, “Crime in Southeast Houston was at an all-time high with the highest concentration being along a seven-mile stretch of Telephone Road. This part of Houston was notorious for prostitution, drugs, robberies, burglaries, auto thefts, assaults, murders, police-involved shoot-outs, and all-around mayhem almost on a daily basis. The citizens living in communities just a mere block or two to either side of Telephone Road along its length were living in constant fear and terror and being victimized by the criminal elements that chose to do their trade there. At the threat of forming their own vigilante groups, they demanded relief to live free of fear and being victimized daily. They were trapped, prisoners in their own homes. The Houston Police captain in charge over the police officers in Southeast Houston conferred with his lieutenants and patrol sergeants as to how to deal with this problem. It was determined that at the core of the constant crime and chaos were the prostitutes who were the magnets that drew the criminal element there. The ‘whore patrol’ was born to deal with the hookers and the criminals clustered around them. Doc and JD were partnered and eventually became known as Houston’s own ‘Dynamic Duo,’ crushing the problem with a vigor never before seen and becoming heroes to the citizens and garnering unexpected respect and admiration from the criminals themselves.”

Published by Page Publishing, Michael Egbert’s engrossing book is an illuminating memoir of a gritty and fast-paced law enforcement career in Houston, Texas.

Readers who wish to experience this engaging work can purchase “Doc and JD Houston’s Own Dynamic Duo” at bookstores everywhere, or online at the Apple iTunes store, Amazon, Google Play, or Barnes and Noble.