Recent release “Cern: Satan’s Playground” from Page Publishing author Nick Huntley is a thought-provoking discussion of the Big Bang, nuclear research, and the powerful dark matter that can change the universe forever. 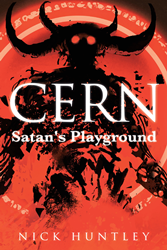 Nick Huntley, an electrical engineer with a lifelong fascination with science, Einstein, time travel, and everything that makes up the universe, has published his new book “Cern: Satan’s Playground”: a fact-based and illuminating account of modern astrophysics, and a compelling revelation of the possible motivations behind the work of scientists at the European Organization for Nuclear Research.

Could CERN, the creator and birthplace of the World Wide Web, be involved and even be behind the most ultimate conspiracy in all of history with their science, symmetry, Satanism, paganism, and rituals? This book is designed as a brief introduction into how CERN is deeply and darkly connected to many world leaders, the Vatican, the Hollywood elites, the deep state, the Illuminati, and the New World Order. The book takes the reader on a journey through what is easily one of the most secretive organizations of all time and is an accessible and very carefully structured introduction into how it all started, how everything was created with the big bang, almost fourteen billion years ago, and CERN’s burning desire to recreate those conditions through physics and by colliding particles together at almost the speed of light and attempting to be like God almighty.

They have created the largest machine in the world and even discovered the god particle, the glue that holds the entire universe together. Why would they build their nuclear research facility upon the burial grounds of Apollyon the Destroyer? Could CERN be responsible for releasing the devil from the bottomless pit, from his prison, hell, as written in the Bible in Revelation 9? CERN has long been accused of opening up black holes that could very well swallow the entire universe, and they even admitted to this Armageddon-like possibility on several occasions.

Behind the scenes, CERN’s insidious plans are to open up wormholes, Stargates, and portals to other dimensions, not to enter through, but more so to let something evil into our world. What or who they intend to welcome is known to have many names, such as the horned god, Abaddon, Apollyon, the Beast, Lucifer, Satan, or as many of us would know to be, the devil.

Will CERN share its dangerous dark matter with a government or military that is dead set on war, world domination, and destruction? Will CERN create a black hole that swallows the world, or will they release Satan and his legion of demons, locusts, and armies upon the world as the last days predict and approach?

Readers who wish to experience this engaging work can purchase “Cern: Satan’s Playground” at bookstores everywhere, or online at the Apple iTunes store, Amazon, Google Play, or Barnes and Noble.