Author Patrick J. Fitch’s new book “Morrigan’s Daughter” is a riveting drama centered on the exploits of a modern incarnation of Morrigan, the Celtic goddess of war.

Recent release “Morrigan’s Daughter” from Page Publishing author Patrick J. Fitch is a compelling crime story introducing Kathleen O’Rourke McShea, a statuesque and fiery US combat veteran, security intelligence expert, and mother of three happily married to another Marine. One fateful day finds them each in the wrong place at the wrong time, with dangerous consequences or themselves and their family. 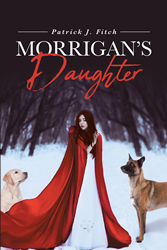 Patrick J. Fitch is a retired Marine, father of two college-educated adults, and remains a diehard Pirates and Steelers fan. Although raised in Pittsburgh, he left his hometown for active duty in Vietnam in 1967, then earned a bachelor's degree from the University of California (Irvine) and later a master's in journalism from the University of Arizona. He lives with his wife of 34 years in Lone Oak, KY. His novel "Morrigan's Daughter" is a spellbinding, debut tale whose characters draw their inspiration from his own father and many of the U. S. Marines with whom he served in Vietnam and the First Iraq (Gulf) War.

Morrigan is the fierce goddess of war and seductress from Celtic mythology who could morph into an eel, a heifer, a wolf, or, most often, a raven, the omen of dread. Spurned by the Celtic warrior, Cuchulainn, his rejection presaged the trap of slow, deliberate revenge—the dish best served cold. She then appeared as the raven and foretold his impending death in combat. The myth describes her having flaming red hair and being dressed in a red cloak, intent on the imposition of wrath. She is the inspiration for the protagonist within.
Published by Page Publishing, Patrick J. Fitch’s engrossing book is an entertaining and suspenseful novel that keeps the pages turning until the satisfying conclusion.
Readers who wish to experience this engaging work can purchase“Morrigan’s Daughter” at bookstores everywhere, or online at the Apple iTunes store, Amazon, Google Play, or Barnes and Noble.