Recent release “Phoebe’s Money” from Page Publishing author Rhonda Kings is fast-paced and suspenseful novel introducing Maddie Montgomery, a graphic designer whose widowed mother, Phoebe, invites a charming stranger into their lives. When the mystery man’s smooth demeanor begins to show some suspicious cracks, Maddie must overcome her initial attraction to reveal the true character and motives of the real Jack Stone. 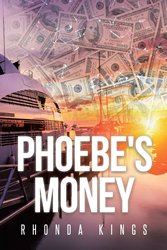 Rhonda Kings is a southern Illinois native who has pursued a twenty-six-year career in graphic design, marketing, and information technology and presently lives with her husband and son in San Clemente, California. She has published her latest book “Phoebe’s Money”: a gripping and potent literary debut.

“Phoebe’s Money” is a suspense novel about a young woman, Maddie Montgomery, who realizes the charming man her mother, Phoebe, has befriended is only after her money. Maddie finds herself risking her own life to reveal the truth about this man before he kills anyone who gets in the way of him and Phoebe’s money.

Maddie and Phoebe meet the charming and mysterious Jack Stone at an expenses-paid weekend getaway. Completely flattered by Jack, Phoebe invites the man to a family gathering in their hometown of Quinn Dixie, Maryland. Not all are as impressed with Jack, especially Adam, a local detective who has recently returned from an undercover assignment. Adam’s suspicion uncovers details about Jack that he immediately shares with Maddie. Maddie, who is somewhat attracted to Jack, disagrees.

Soon Jack’s behavior starts to change and causes Maddie to think twice. Using information that Adam has uncovered about the mysterious Jack Stone, Maddie pieces together a puzzle that unveils startling information about Jack, the first having to do with his dead wife, Jennifer. With only the intention of finding the truth, Maddie’s discoveries lead her to a startling conclusion that the charming Jack Stone may have devious intentions. Her determination and newfound bravery lands her in a face-to-face confrontation with not only Jack Stone, but another victim who is equally dangerous and desperate.

Published by Page Publishing, Rhonda Kings’s engrossing book is a riveting and suspenseful work that keeps the pages turning until the stunning conclusion.

Readers who wish to experience this engaging work can purchase “Phoebe’s Money” at bookstores everywhere, or online at the Apple iTunes store, Amazon, Google Play, or Barnes and Noble.