Author Ronda Mau’s new book “Walking in Each Other’s Shoes” is a lighthearted story with a creative solution for easing the tension in a family reunited after many years.

Recent release “Walking in Each Other’s Shoes” from Page Publishing author Ronda Mau is a thought-provoking journey of understanding, empathy, and respect as a father and his grown daughter struggle to understand each other’s lives. 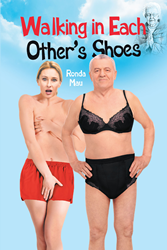 Ronda Mau, a forty-nine-year-old Michigan native currently residing in Marion Springs, has completed her new book “Walking in Each Other’s Shoes”: a poignant screenplay illustrating the invisible wounds and emotional baggage that can create obstacles to understanding between family members, friends, and strangers.

Ronda writes, “Sara, thirty-four and a mother of three, never understood her father, Paul. He left her, her mother, and sister after he returned from the war. After she’d grown and moved away with her husband and three kids, her dad reunited with her mother. Years later she finds her and her family moving to be closer to her mother. When Sara and her dad reunite, they end up in a big argument. Her mother makes a wish. And they find themselves in each other’s bodies. The only person that knows is Sara’s three-year-old daughter, Emma, and she’s not to tell anyone that Mommy is really Grandpa. Before they can turn back into each other’s bodies, they must walk in each other’s shoes—lives—without any physical contact.

They are given cell phones, which will only work to communicate only during emergencies. And both were given a pad of paper to write down their daily routines. Now Sara, in her seventy-nine-year-old dad’s body, she feels his aches and pains. She changes his wardrobe to “skinny jeans” and ends up taking his Viagra instead of his heart medication during his golf tournament. Paul needs to learn how to raise three kids while her husband is away—potty train Emma; organize Dora, middle child; and straighten the oldest child’s, Jenny’s, attitude. Will they truly understand the meaning of walking in each other’s shoes or remain switched?”

Published by New York City-based Page Publishing, Ronda Mau’s engrossing book is an entertaining tale highlighting the importance of empathy and understanding in all human relationships.

Readers who wish to experience this engaging work can purchase “Walking in Each Other’s Shoes” at bookstores everywhere, or online at the Apple iTunes store, Amazon, Google Play, or Barnes and Noble.