“Mother's Kaddish Boy” from Christian Faith Publishing author Sam N. Shapiro is an emotional account of the atrocities suffered by innocent bystanders at the hands of Hitler’s Germany, and other selfish, cruel individuals, such as the Kielbasa brothers who were responsible for killing many of the Jewish people hiding in the Janow Lubelski forests, as well as enduring the natural elements of Poland’s forests. 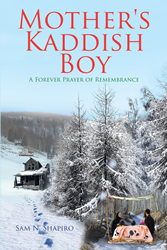 Shapiro writes, “I dedicate this book to my mother, who called me her “Kaddish Boy”. The heart and soul of this memoir, she gave me an upbringing and philosophy which has served me all my life. Because of her love, and the values, confidence, and strength she instilled in me, I have been able to overcome so many of life’s challenges and disappointments.

Her dedication to and her faith in her God superseded the taunts, humiliation and suffering which we, as Jews, were subjected to. She died cruelly, at the hands of Polish bandits who were robbing and killing seeking gold, and because of the politics and religion in this part of the world.

Always, she trusted in her God: “God will help us survive this bad World War,” even as we were fighting daily for our lives, without food or water; barely able to breathe as we hid in our flimsy bunker in the forest.

Even to this day, as her “Kaddish Boy”, I remember her virtue, strength, courage, and wisdom, as I pray the Kaddish prayer for her and for my Father - a good Jewish boy.”

“Sam believes that if Pope Francis had been Pope during WWII, instead of Pope Pius XII, the Catholic Church would have treated the Jewish people as equals.

Thus, he concludes that at least one third of the six million Jews killed would have survived – by hiding in the forests, mountains or villages, as there were many Catholic Polish people who would have risked their lives (as so many did, in fact) and would not have co-operated with the Germans and Polish police, if guided by their Church.

There is no way that the Germans alone would have been able to search all the villages, or other places where the Jewish survivors were forced to hide. The Polish neighbours, who were trusted with the Jewish belongings and homes as they fled for their lives, would have been discouraged by Pope Francis from coming after, killing, or betraying these innocents to the Nazi war machine.

As a result, Sam’s distressing tale of inhumanity to other humans leaves no doubt as to the moral edict we lived by eighty years ago and, sadly even to this day.

But Sam’s hope throughout all of this is, and has been, that man/womankind will learn from his/her mistakes and treat one another as championed by Pope Francis: Thou Shalt Not Kill.”

Published by Christian Faith Publishing, Sam N. Shapiro’s new book is a heartbreaking retelling of the many painful moments experienced by the author and family during WWII.

With firsthand accuracy, Shapiro walks readers into the past to experience life hiding from dangerous enemies, both known and unknown, as they all fought for survival at the mercy of a ruthless dictator.

View a synopsis of “Mother's Kaddish Boy” on YouTube.