Author Siam Erzuah’s new book “It’s the Money, Amen: A Tale of Religion, Deception, and Greed” is a fast-paced tale of avarice and revenge in a fictional African nation

Recent release “It’s the Money, Amen: A Tale of Religion, Deception, and Greed” from Page Publishing author Siam Erzuah is a fictionalized portrait of the sordid state of certain predatory modern religious practices, especially in Sub-Saharna Africa and in many other places of the world. 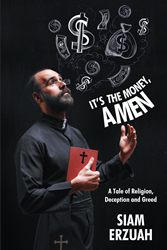 Siam Erzuah is a sales consultant and mentor at a car dealership who immigrated to the United States from his native Ghana in 1997 and now resides with his wife and three children in Lakeridge, Virginia. He has published his new book “It’s the Money, Amen: A Tale of Religion, Deception, and Greed”: a compelling story loosely based on his own life experiences as a young man in sub-Saharan Africa.

When two money-conscious teenage thugs, Joseph Basabasa and Nipa Crazima, feel they could not tolerate receiving an undeserved education at a delinquent institution, Delinqhose Reformatory, they plan and implement an escape strategy to launch their careers as preachers of faith and miracle workers.

Having succeeded in establishing themselves as miracle workers, the two friends, now called Pastor Joe Wrap and Mallam Nipa Manabad, achieve their aim by becoming rich while commanding thousands of followers. In their routine undertakings, they indulge in blatant deception to achieve their goals, while Joe Wrap particularly ups the ante by engaging in reckless philandering.

With Wrap involved in cheating, his wife, Yenti-Gyae Wrap, decides to turn the tables on him by dating a young drug dealer. The pastor, however, could not stand the insult of his wife cheating on him and thus kills his wife’s boyfriend.

To settle the score, Mrs. Wrap avenges her late boyfriend by murdering her husband’s girlfriend, Whinny Wilgetmyshare, when she catches the two having an affair. The Wraps are able to escape justice by using bribery while exploiting the incompetency of the local police force.

At a certain point in time, an ascetic and itinerant Christian preacher, Man-of-Sorrow, with the help of an old pious and learned Muslim ally, El-Hajj Yudugud (who also happens to know the two charlatans), confronts the pastor and his Muslim friend on their unsavory deeds. The two faith peddlers, however, resent the intrusion and plan to eliminate the new adversaries if the need arises.

Also caught in the saga of the faith peddlers are two philanthropic expatriates, Darling Adomaityte and Kidest Desta, who are working assiduously to assist members of Pastor Wrap’s church and others while, at the same time, endeavoring to expose the pastor and his Muslim accomplice.

At the end of this thrilling saga, victims of Pastor Wrap and Nipa Manabad avenge their ill treatment by planning and implementing the elimination of both religious preachers.
Published by Page Publishing, Siam Erzuah’s engrossing book is a compelling choice for dramatic fiction readers.
Readers who wish to experience this engaging work can purchase “It’s the Money, Amen: A Tale of Religion, Deception, and Greed” at bookstores everywhere, or online at the Apple iTunes store, Amazon, Google Play, or Barnes and Noble.