Author T.A. Blitch’s new book “Pop’s Place: Some Things Are Meant to Be” is a riveting romantic drama set on picturesque Sullivan’s Island in the postwar era

Recent release “Pop’s Place: Some Things Are Meant to Be” from Page Publishing author T.A. Blitch is an evocative work of historical fiction introducing Jackson “Pop” Harrison, a World War II hero who begins the process of rebuilding his life in his ancestral home on a small island off the coast of Charleston, South Carolina after retiring from the Navy. Follow Pop’s eventful journey as he confronts the horrors of combat, the demands of establishing a thriving boardinghouse, and the promise of love with a beautiful woman who has captured his heart. 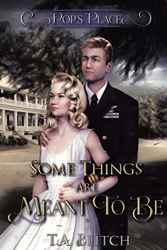 T.A. Blitch, a retired US Navy officer currently serving as president of Magellan Christian Academies, a faith-based early childhood education center he founded in Mesa, Arizona, who resides with his wife of thirty-two years and their two cats in Jacksonville, Florida, has published his new book “Pop’s Place: Some Things Are Meant to Be”: a stirring romantic adventure inspired by his own father’s illustrious naval career and actual family events.

Based in part on the life and times of World War II US Navy dive-bomber hero Rear Admiral John Blitch, Jackson “Pop” Harrison returns from the war to his ancestral homestead on Sullivan’s Island near Charleston, South Carolina where he finds himself without family… except those in the family plot under the spreading oak tree. There, like so many other Americans who had survived years of intense conflict, he goes about picking up the pieces of his shattered life while haunted by nightmares of his childhood and military combat.

Almost immediately upon hanging up the shingle on “Pop’s Place,” the family residence-turned-boardinghouse, Pop is immersed in adventure after adventure with romance and betrayal, life and death, challenges and victories, ironies and mysteries, and the drama of post-war low country. Confident in battle as a warrior, Pop is curious in discovering that he is suddenly unsure of himself outside the cockpit—particularly with his best friend’s beautiful young daughter who has matured while he was away at war.

Though he narrowly escaped countless close calls in a war that claimed the lives of so many others, true to his selflessness, courage and strength of character, Pop decides between life and making the ultimate sacrifice for the one he loves.

Published by Page Publishing, T.A. Blitch’s engrossing book is an enthralling novel that keeps the pages turning until the stunning conclusion.

Readers who wish to experience this engaging work can purchase “Pop’s Place: Some Things Are Meant to Be” at bookstores everywhere, or online at the Apple iTunes store, Amazon, Google Play, or Barnes and Noble.