Author Terry Watto’s new book “Patriots Are Not Deplorable Here’s Why” is an eye-opening analysis of comments made by Hillary Clinton during the 2016 election cycle.

Recent release “Patriots Are Not Deplorable Here’s Why” from Page Publishing author Terry Watto is a highly detailed and eye-opening deep dive into dispelling comments made by then-presidential candidate Hillary Clinton during the 2016 presidential election and further actions within the United States government uncovered in the course of research. 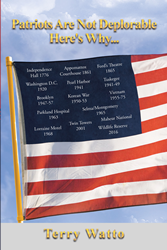 Terry Watto, a hard-working man who has dipped his toe into many different fields throughout his working career, has completed his new book “Patriots Are Not Deplorable Here’s Why”: a gripping and potent expose of the United States government’s involvement in four “cataclysmic events” in American history.

Published by Page Publishing, Terry Watto’s exposing tale is intended to dispel comments made by Hillary Clinton during the 2016 elections when she said, “Half of Trump’s supporters are deplorable…irredeemable.” As the author researched material to refute Clinton’s remarks, he discovered multiple examples of intentionally misleading statements by the United States government. Those misleading statements by both the government and the mainstream media, in turn, created false concepts that were force fed to the American public.

The book concentrates on the “big picture” of four cataclysmic events: the murder of President John F. Kennedy, the terrorist attacks on 9/11, the controversy surrounding Hillary Clinton’s involvement in Benghazi, and the alleged Russian Hoax. While researching those four diabolical events, the author discovered an even more sinister plan that he believes could lead to the destruction of America as the country exists today. Uncovering a “smoking gun” document, the author felt compelled to expose the awful truths every American must know. It is the author’s hope this book will awaken and inspire Americans to engage politically to save the republic and the American Dream.

*The author makes no claim of having knowledge proving the existence of a person or secret group of people providing funding to deep state, country, or world organizations engaging in covert, unlawful, or illegal activities. Nor does the author contend he has any direct evidence of the existence of a deep state alleged to exist except from other sources claiming the deep state’s existence. The author attempts to piece together bits of gathered information to form a big picture. That picture is the opinion basis for the timeline and story line concerning the Russian Hoax.

Readers who wish to experience this provocative work can purchase “Patriots Are Not Deplorable Here’s Why” at bookstores everywhere, or online at the Apple iTunes Store, Amazon, Google Play, or Barnes and Noble.