Bob Scott’s newly released “I Wasn’t Supposed to Live!” is an inspiring story of the author’s journey of survival during birth to achieving his goals in life

“I Wasn’t Supposed to Live!: My Twin Died Before Birth!” from Christian Faith Publishing author Bob Scott is an evoking memoir of the author’s moments of near-death during childhood, his duty as a soldier, and his retirement after a fruitful work. 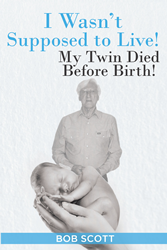 Scott shares, “Bob survived his premature birth after sharing the womb with his dead, decomposing twin. He was born in Putman County, Indiana, in a farmhouse with no hospitalization. The delivering doctor told his father he would not live through the night. At seven years of age, he was diagnosed with surviving twin syndrome.

“His curiosity of how things worked helped shape much of his activity in his early years.

“Through the years, he developed a reputation for being able to fix almost anything that quit or broke except for a broken grasshopper’s leg.

“Bob spent four years in the United States Air Force, serving two years in Germany as the maintenance crew chief on the ground-to-ground Mace Missile. Upon discharge, Bob went to work for ITT Electro Optics, where he spent thirteen years. Six months after leaving his position at ITT, he had lunch with his previous boss, who informed him that ITT had hired six people to do all the things he had done for ITT.

“Bob spent fifteen weeks behind the Iron Curtain in the Ukraine, USSR, in 1981 and 1982—years that were stressful and educational. A meeting with ‘the Russians’ in November 1981 may have helped contribute to the fall of the USSR.

“In 1984, Bob took the position of motor manufacturing engineer at Chamberlain Consumer Group. Bob retired after twenty-one years with Chamberlain where he was affectionately known as the Motor Man.

“When informed of a need for something new by friends, Bob would design the item on his computer then produce a prototype, proof of performance product, and deliver it and the prints to the one who had the need, stating, ‘Here you go. You can patent it.’ 2nd Safe, an added safety for law enforcement weapons, is one of those items (2ndsafe.com).”

Published by Christian Faith Publishing, Bob Scott’s new book is a testament to the author’s unyielding resilience that pushed him forward in life to a state of purposefulness.

View the synopsis of “I Wasn’t Supposed to Live!: My Twin Died Before Birth!” on YouTube.

Consumers can purchase “I Wasn’t Supposed to Live!: My Twin Died Before Birth!” at traditional brick-and-mortar bookstores or online at Amazon.com, Apple iTunes store, or Barnes and Noble.

For additional information or inquiries about “I Wasn’t Supposed to Live!: My Twin Died Before Birth!” contact the Christian Faith Publishing media department at 866-554-0919.