It is still unknown exactly how head trauma leads to loss of cognition and brain function in later life. Accumulating research shows normal brains contain germs, living quietly. The new "Beehive Theory" contends blows to the head activate them, releasing toxins and antigens which cause inflammation and other damage. This possibility has been overlooked and warrants research to discover a drug for prevention or treatment. 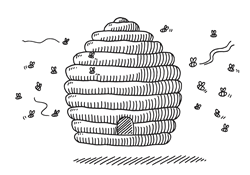 When a beehive is knocked, angry bees swarm out and attack. Brain microbes may respond similarly to trauma, and create brain damage.

Surprisingly, germs inside the brain may hold the answer to TBI and CTE.

"Microbes may be responsible for the deterioration in brain function seen years after participation in football, boxing, soccer, and other contact sports, and in soldiers who survive blast injuries," asserts Leslie Norins, M.D., Ph.D. in his new “Beehive Theory.”

His formulation was recently published in the peer-reviewed medical journal, Medical Hypotheses.

The serious late sequelae of head trauma most notably include cognitive impairment and behavioral changes - even suicide. The medical label is traumatic brain injury (TBI), with lesser variants being called minor or repetitive TBI or chronic traumatic encephalopathy (CTE). The mechanism translating the trauma into the later complications is unknown, and there is no pharmaceutical preventive or cure.

Dr. Norins says the crucial underpinning of his theory is that scientists have found the normal human brain is not sterile, but is home to various microorganisms-- which seem to be living peacefully within it.

The theory’s name comes from the fact that striking a tranquil beehive will incite the peaceful bees to swarm out and attack anyone nearby. Dr. Norins believes that, in like fashion, blows to the head can dislodge the brain’s microbes from their comfortable dwelling spots, and they then release toxins and antigens, which trigger inflammation and brain damage.

Dr. Norins is the CEO of Alzheimer’s Germ Quest, Inc, which encourages research on infectious agents as triggers of Alzheimer’s disease. He became interested in TBI after reading that microbes were present in even normal brains.

"This situation seems to have been overlooked thus far in most TBI research," he says.

“Hopefully, brain trauma researchers will now begin to study these new facets. It’s possible we could get, for TBI, a simple blood test, an antibiotic, an anti-inflammatory, or even a vaccine," he says.

Alzheimer’s Germ Quest, Inc. is a public benefit corporation headquartered in Naples, Florida. It sponsors the $1 million Challenge Award for the scientist who persuasively proves that a microbe causes Alzheimer’s disease, and encourages research on this possibility. It neither seeks nor accepts outside donations