C. S. Lark’s newly released “Schideler’s Goal” is a heartrending tale of a Jewish girl’s toils during the Nazi occupation

“Schideler’s Goal” from Christian Faith Publishing author C. S. Lark is a harrowing story of a young Semitic girl’s struggles during her captivity in Auschwitz. 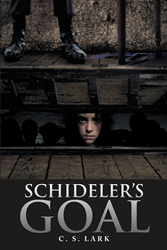 “Schideler’s Goal”: a page-turning novel that bears the pain-stricken life of Annishia, a Jewish girl imprisoned at a concentration camp, and her circumstances that test her faith and loyalty to her brethren. “Schideler’s Goal” is the creation of published author C. S. Lark, a dedicated writer, musician, as well as a retail associate.

Lark shares, “It’s 1943. Poland has just been invaded, and all the Jews are to board trains headed to the camps. They are told that they are going to work camps, but they are headed to extermination camps…

“After losing everything, including her family, Annishia joins the resistance and decides to save the Jews from Auschwitz. She realizes that she is in danger. She struggles to make sure that the Nazis never find out what she is doing. One day, someone turns her in, and she is abducted by the Nazis. She is sent to Auschwitz where she vows to help the Jews escape. She becomes a house servant of an officer who commands his soldiers to ‘kill them all.’ Now she is challenged with living out her vow or protecting herself. What will she choose?

“This novel tells a story through the eyes of Annishia, a seventeen-year-old girl who loses everything including her family. She becomes part of the resistance and embarks on a mission to save the lives of six hundred Jews from the horrors of Auschwitz during what was the most horrid years.

“This is a story to help people never forget history and the value of human life, and to show how to forgive the unforgivable.”

Published by Christian Faith Publishing, C. S. Lark’s new book unveils the sorrows of the Holocaust, which marked a time of great turmoil for Jews and those who sympathized with their survival.

A historical fiction, “Schideler’s Goal” is sure to capture the readers’ hearts and tug them with the overflowing emotions of a young woman persecuted for her belief and ancestry despite her innocence.

Consumers can purchase “Schideler’s Goal” at traditional brick-and-mortar bookstores or online at Amazon.com, Apple iTunes store, or Barnes and Noble.

For additional information or inquiries about “Schideler’s Goal,” contact the Christian Faith Publishing media department at 866-554-0919.