Captain Randall J. Jansen, USMC Ret.’s newly released “Duty Is Ours, Results Are God’s” unveils one’s purposeful life as a US Marine and transition into a common citizen

“Duty Is Ours, Results Are God’s” from Christian Faith Publishing author Captain Randall J. Jansen, USMC Ret. is a riveting narrative of the author’s journey from being a US Marine to an average citizen that inspired lessons worth noting. 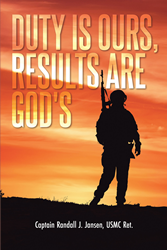 Captain Jansen shares, “In ‘Duty is Ours, Results are God’s,’ Captain Randall J. Jansen tells of his tough and demanding yet adventurous and exciting nine years in the US Marine Corps. He discusses principles to follow and life lessons to be learned, along with interesting and sometimes funny stories.

“Jansen began as a private in boot camp and later earned his officer’s commission and naval aviator wings through attending flight school at the Naval Air Station in Pensacola, Florida. Graduation was followed by his worldwide service as a helicopter pilot in the Caribbean Sea, the Mediterranean Sea, and Vietnam. Jansen was seriously wounded on his 248th combat flight mission during the Vietnam War, the resulting disability of which led to his mandatory retirement from the US Marine Corps.

“Following his career in the Marine Corps, Jansen transitioned back to civilian life and began an extended investigation into some critical and perplexing questions. Why would someone voluntarily serve or commit to duty which could result in serious injury or death? Is service worth it? Where do we get the concept of freedom, liberty, purpose, or self-sacrifice? Is there absolute truth or is everything relative? Is there a correct, reasonable, or logical worldview by which people should live? If there is, how does someone find it and then live it?”

This book presents the dedication of a soldier and ordinary citizen that shows his resilience to an ever-changing yet blessed life.

View the synopsis of “Duty Is Ours, Results Are God’s” on YouTube.

Consumers can purchase “Duty Is Ours, Results Are God’s” at traditional brick-and-mortar bookstores or online at Amazon.com, Apple iTunes store, or Barnes and Noble.

For additional information or inquiries about “Duty Is Ours, Results Are God’s,” contact the Christian Faith Publishing media department at 866-554-0919.