“Not Your Grandmother’s Book of Revelation: Using Scripture to Explain the Book of Revelation” from Christian Faith Publishing author Charyl Craddock is a profound creation that reveals the truths behind the book of Revelation by presenting the events in the order at which they were shown to John. 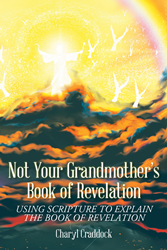 “In this book, Scripture is presented that positively establishes that the Revelation of Christ as recorded by John is written in the order that the events were shown to John, not chronologically; that the events of the vision, ‘the events that shall be hereafter’ (Revelation 1:19), began occurring during the second and third century after the death and resurrection of Jesus Christ; that the first three and a half years after the signing of the peace agreement between Israel and ‘many’ will be a peaceful time during which Israel will build the third Temple; the final three and a half years, the Great Tribulation, is the pouring out of the wrath of Satan, not the wrath of God; and that Jesus told the apostles that the First Resurrection, the ‘Rapture’ does not occur until ‘immediately after the tribulation’ (Matthew 24:29).

“It will be shown that America is in the Book of Revelation. A detailed description of the Antichrist, False Prophet, one-world government ‘Beast,’ and ‘mark of the Beast’ are presented, as is a synopsis of all chapters and the prophecies of Daniel. Finally, a timeline of the events of the vision is presented.”

Published by Christian Faith Publishing, Charyl Craddock’s new book is a great commentary that is written in a simple and understandable way, completely backed up by Scripture, for readers to get a tight grasp on what is happening and what is yet to happen in God’s plans.

For additional information or inquiries about “Not Your Grandmother’s Book of Revelation: Using Scripture to Explain the Book of Revelation,” contact the Christian Faith Publishing media department at 866-554-0919.