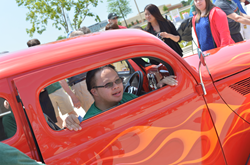 The car was first revealed to students at My Possibilities on Monday, May 13 at a classic car show on the organization’s campus.

Children’s Author and Philanthropist C.A. Hartnell donated her fully restored 1937 Ford custom, “Hawk’s Ride,” to nonprofit, My Possibilities in Plano, Texas. My Possibilities is a Plano-based for-cause 501c(3) organization that serves as the pioneering leader in vocational education for adults with intellectual and/or developmental disabilities throughout North Texas.

To present the donation, Hartnell embarked on a road trip along historic Route 66 beginning in Santa Monica, California to personally deliver the car to My Possibilities. She stopped along the way at historical landmarks including The Wigwam Motel, Cadillac Ranch and the restored Route 66 Gas Station in McLean, Texas that was built in 1929, and for book readings and special appearances at charitable organizations, libraries and Barnes & Noble stores in Victorville, CA; Barstow, CA and Seligman, AZ. Visit C.A. Hartnell’s blog for photos and additional details of the journey.

The car was first revealed to students at My Possibilities on Monday, May 13 at the first classic car show on the organization’s campus, where Hartnell proudly handed over the keys to her beloved classic car, which she has used for the past 10 years to promote her children’s chapter book series, “The 1950s Adventures of Pete and Carol Ann.” The car was presented to the My Possibilities Car Club, where it will be used for fundraisers and community car shows to bring awareness to the programs, facilities and services that My Possibilities provides within the North Texas community.

The car was later presented to donors and supporters at the My Possibilities Annual Community Ball on Saturday, June 15, along with a brief documentary film on the road trip (click here to view). Celebrating 11 years of service in the intellectual and developmental disabilities community, the organization successfully raised $343,000 in one night.

“Philanthropy can have many different faces, including donating a valuable car to an organization that will utilize it to make a world of difference for their folks,” said Hartnell. “The classic car is opening a brand-new world for their HIPsters (Hugely Important People) and allowing them to engage with their community in new and exciting ways. What an amazing adventure for folks with special needs and the world that ‘needs’ them!”

“This generous gift is the vehicle for inclusion,” said Michael Thomas, executive director at My Possibilities. “With Hawk’s Ride, our HIPsters will rewrite history and proudly participate in community events. Revealing the car to our HIPsters was nothing short of magical. We look forward to the ride to come.”

Hartnell writes about “Hawk’s Ride” in her four-book series, “The 1950s Adventures of Pete and Carol Ann.” The four books, “SCARY SPRING: Our Polio Fright of 1955,” “SINISTER SUMMER: Cars, Cruisers, and Close Calls,” "FEROCIOUS FALL: Our Wild Weather Escapes” and “WILD WINTER: Christmas, Clues, and Crooks,” are inspired by actual events from Hartnell's childhood that take children back to life in the 1950s growing up in El Monte, California.

About C.A. Hartnell:
C.A. Hartnell is an entrepreneur and an award-winning author of a historical fiction four-book series, The 1950s Adventures of Pete and Carol Ann, which provides readers of all ages with a glimpse into the excitement and real-life issues of the 1950s. Hartnell’s fast-paced, historical-fiction, all-American chapter book series, including Scary Spring, Sinister Summer, Ferocious Fall, and Wild Winter, takes readers on a blast through her past as a child growing up in El Monte, California. The 1950s Adventures of Pete and Carol Ann have earned Hartnell a Mom’s Choice Silver Award, Moonbeam Children’s Book Award, Literary Classics Gold Award and an eLit Silver award. Hartnell is a passionate philanthropist who supports non-profit organizations in Las Vegas, Dallas and Southern California. For more information, visit https://cahartnell.com or follow her on Facebook, Twitter or Instagram.

About My Possibilities:
My Possibilities is a Plano-based for-cause 501c(3) organization that serves as the pioneering leader in vocational education for adults with intellectual and/or developmental disabilities throughout North Texas. To learn more, visit: mypossibilities.org.

Hawk's Ride was presented to donors and supporters at the My Possibilities Annual Community Ball on Saturday, June 15.