Chris Murphy’s new book “In His Majesty’s Secret Service” is an enthralling memoir of a US Secret Service agent and his astounding professional career.

Recent release “In His Majesty’s Secret Service” from Page Publishing author Chris Murphy is a galvanic account of a man’s life in the United States Secret Service. 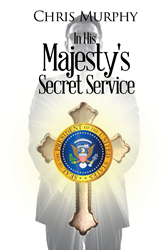 Chris Murphy, a director of public safety on the state level and the capital city level as well as a federal law enforcement leader, has completed his new book “In His Majesty’s Secret Service”: a gripping autobiography about the author’s circumstances as a protective agent for the US government.

Author Murphy shows a man’s incomparable duty for his country: “‘In His Majesty’s Secret Service’ is the memoir of a career agent with the United States Secret Service. Chris Murphy recounts a life nearly cut short by severe asthma. His parents were told to prepare to lose their son in childhood. God had other plans, and Chris never lost the sense of gratitude and enthusiasm that comes with second chances. It is to God’s glory that he worked and succeeded. The Secret Service raised him to leadership, but he started public service in law enforcement as an Auburn, Alabama, policeman in 1978. Chris was involved in the full array of municipal police work, including having to shoot an escaped felon. As a Tennessee Bureau of Investigation agent, he worked major felony cases, including participation in the seizure of 1,200 pounds of 98 percent pure cocaine. By God’s grace, he ended up arresting the kingpin and his accomplice without backup or adequate weaponry. Bad guys should never bring their daughters to work.

In 1985, Chris joined the US Secret Service. He worked federal criminal investigations, including threats against the president and other protectees. He also guarded every president from Ronald Reagan through George W. Bush. He protected vice presidents, presidential candidates, visiting foreign leaders, and former presidents. Chris traveled to over twenty different countries and most of the United States performing his duties. Meeting President Ronald Reagan and Pope John Paul within a two-week period was exhilarating! Conversely, getting the second lady and her aging parent lost in France was demoralizing. A healthy sense of humor and humility are needed in such extremes. Fortunately, Chris has both. He taught terrorism, hostage negotiation, and protective intelligence in the Office of Training. Rising to retire as the special agent in charge of Alabama and Mississippi, Chris helped manage the events and consequences of September 11, 2001, and Hurricane Katrina.

In 2006, Murphy’s demonstrated leadership and innovation contributed to his postretirement appointment to Alabama governor Bob Riley’s cabinet as director of public safety. After completing Riley’s mission, Murphy was appointed to Mayor Todd Strange’s cabinet bearing the same title over the police, fire, emergency communications, and emergency management agencies. He served seven years in Montgomery, bringing his total public service to forty remarkable years. His Secret Service encounters with history are unforgettable. Chris’s passion for ethics, leadership, and his Christian faith provided courage to make tough, necessary decisions. It has been a truly fascinating career!”

Published by New York City–based Page Publishing, Chris Murphy’s engrossing tale is a testimony of a man’s determination to uphold his sworn obligation as a government agent.

Readers who wish to experience this impassioned work can purchase“In His Majesty’s Secret Service” at bookstores everywhere or online at the Apple iTunes store, Amazon, Google Play, or Barnes and Noble.

About Page Publishing:
Page Publishing is a traditional New York–based full-service publishing house that handles all of the intricacies involved in publishing its authors’ books, including distribution in the world’s largest retail outlets and royalty generation. Page Publishing knows that authors need to be free to create, not bogged down with complicated business issues like eBook conversion, establishing wholesale accounts, insurance, shipping, taxes, and the like. Its roster of authors can leave behind these tedious, complex, and time-consuming issues, and focus on their passion: writing and creating. Learn more at http://www.pagepublishing.com.