“Daniel’s Deeds and the Palace of Everywhere” from Christian Faith Publishing author Dane Stivers is about a thrilling journey of a man whose safe and secured life changed in a second as he met the world’s reality where he had no choice left but to face it. 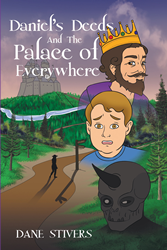 Stivers shares, “Daniel lives a life of safe complacency, or so it seems. Born to satisfy a faceless government that tells him all is and always will be well (until it isn’t), Daniel is spoon-fed a reality that he has no other choice but to accept, and he gladly does.
“That is, until the Man sustaining him no longer appears, and the government cuts him off to leave him to die. What then?
“Beyond the walls of his home is a reality that only his next-door neighbor, Holly Sprint, is capable of leading him through into a glorious life that he was truly created for.
“But there is a dark presence ruling Daniel’s world, one that has an age-long plan to punish Daniel for his retaliation from the life that had always been his to lose…
“Daniel’s Deeds and the Palace of Everywhere represents the first book in a series of an eventual five. The Daniel’s Deeds series will continue in 2020.”

Published by Christian Faith Publishing, Dane Stivers’s new book is a remarkable fight for goodness and justice that will give the readers an exciting ride along Daniel’s journey towards his purpose.