Recent release “The Falling Empire- Silent Assassin: Caesar’s Rise to Power” from Page Publishing author Dane Stuart is an evocative political thriller bringing the geopolitical intrigue, sophistication, and brutality of Rome to vivid life as a young and ambitious Julius Caesar makes his mark as chief general of an empire in turmoil. 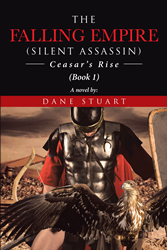 Dane Stuart, a former songwriter and disc jockey, has published his new book “The Falling Empire- Silent Assassin: Caesar’s Rise to Power”: a fast-paced work of historical fiction that keeps the pages turning until the dramatic conclusion.

As the war raged between Rome and Gaul, an unexpected turn brought relief to the Romans, when the Gauls signaled their surrender. Julius Caesar was praised for his bravado, along with Octavius, the ruler of Rome, who had appointed Caesar as chief general of the Roman Empire.

Immediately following the surrender, a chain of mysterious events befell the city of Rome, leaving the senators uneasy and the citizens frightened.

Knowing that an internal struggle between the first lady of Rome and others who envy her position was amid the privileged, unanswered questions began to circulate. Dark secrets loomed from past deeds that were thought to have been buried long ago.

Will Caesar continue to hold his position as chief general at such a young age, or will he and Octavius be the reason the empire falls from grace?

Still in all the greatest unanswered question remains—who is the silent assassin?

Readers who wish to experience this engaging work can purchase “The Falling Empire- Silent Assassin: Caesar’s Rise to Power” at bookstores everywhere, or online at the Apple iTunes store, Amazon, Google Play, or Barnes and Noble.