“Angel Flight of ‘82” from Christian Faith Publishing author Dean Doudna is a poignant account of a real experience that took place in 1982 when an immensely traumatic event challenged the courage and faith of one man. 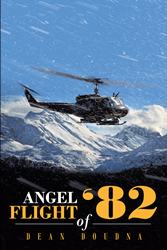 “Angel Flight of ‘82”: a fascinating journey about bravery, tragedy, choices, and a test of faith. “Angel Flight of ‘82” is the creation of published author Dean Doudna, a retired CW5 Master Aviator. Besides working as a Standardization Instructor Test Pilot, he governed the Fort Rucker flight community while performing the Government Flight Representative duties for Fort Ruckers 650 helicopters during the remaining eleven years of his career.

Doudna shares, “This true story took place in 1982. At the time, Dean was a W1 and stationed in Korea. He had only been graduated from the army’s flight program ten months and did not yet possess the flight experience befitting the multiple flight decisions required of this flight. Not only did Dean need to deal with the flight environment but had to come to terms with the unfortunate decision matrix that he used to fly in the first place. Dean quickly realized that he had first to understand his flight conditions before he could modify emergency procedures designed to save his life.

“To his horror, Dean had never come to grips with the plane crash that killed his father, twin, and two additional passengers fourteen years earlier. That traumatic event was haunting him this day while dealing with the environmental conditions that were trying to kill them all on this flight. The two flights’ parallel is uncanny. There is enough background provided to allow the reader a glimpse into the unique and sometimes disastrous Doudna early years. The author does his best to remind the readers that God is the real hero. At every turn, the Holy Spirit whispers solutions, guiding Dean with decisions decades ahead of his ten-month flight experience.

“There are plenty of human-interest stories scattered throughout the novel to give the reader a rest bit from the life-threatening drama that plays out in the cockpit. Dean continued his career where he served thirty-five years active duty in the army. Upon retirement from the army as a CW5, was selected to be the Government Flight Representative, where he served for another eleven years risk mitigating and approving the maintenance procedures and flights for all of Fort Rucker’s 650 helicopters. He retired in 2015 and felt compelled to tell this story.”

Published by Christian Faith Publishing, Dean Doudna’s new book is an inspirational tale that witnesses how God played His role in the life of one man. Here, readers will see the greatness of the Savior’s power and the Lord’s grace.

View a synopsis of “Angel Flight of ‘82” on YouTube.

Consumers can purchase “Angel Flight of ‘82” at traditional brick & mortar bookstores, or online at Amazon.com, Apple iTunes store, or Barnes and Noble.

For additional information or inquiries about “Angel Flight of ’82,” contact the Christian Faith Publishing media department at 866-554-0919.