“America’s Greatest Projects: From the Panama Canal to the Alaskan Pipeline” from Christian Faith Publishing author Dom Perrotta is a comprehensive narrative that delves into the amazing feats of some of the most accomplished and resourceful engineering and administrative minds of the Twentieth Century. Outlined in this book are four projects that showcase the country’s standing and excellence in the world. 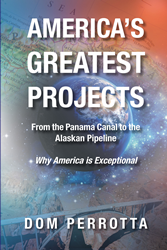 “America’s Greatest Projects: From the Panama Canal to the Alaskan Pipeline” is an account of the incredible ingenuity and creativity that was required to conceive, plan, and execute four of the most important engineering feats of this time. With great enthusiasm and energy, author Dom Perrotta chose these four projects (The Panama Canal, The Hoover Dam, The Manhattan Project, and The Alaskan Pipeline) to illustrate the American inspiration, resourcefulness, and sheer determination it took to accomplish these tremendous achievements.

Author Dom Perrotta, growing up near Pittsburgh, PA, has always had a great interest in the engineering profession. Mr. Perrotta has an Electrical Engineering degree as well as an Industrial Management degree from the Tepper Graduate School of Business, both at Carnegie Mellon University. He became a professional engineer and project manager with the US Steel Corporation, at one point managing the largest private industrial project in the United States. He later formed his own company, which was featured in INC magazine as one of the five fastest-growing companies in the country. Mr. Perrotta’s desire to spotlight America’s greatness relative to engineering led him to write this book in the hopes that Americans will better understand their remarkable ingenuity and exceptionalism.

Mr. Perrotta shares, “During the past 120 years, Americans have achieved phenomenal success to become the greatest nation in the history of the world. Notwithstanding the many inventions we have created, Americans have been responsible for some of the greatest and most beneficial projects in the modern era.”

“This initial publication describes how these great projects were accomplished from proper planning and capabilities of administrative support, governmental commitments, engineering firms and subcontractors to the physical and intellectual grit of countless American workers dedicated to the end results for the greater good of our nation. Each involved the wisdom and commitment of the many people Perrotta has named in these pages, many of whom never received their due recognition.”

Published by Christian Faith Publishing, Dom Perrotta’s new book is a reminder of how exceptional America has become through perseverance and initiative, reflected by these projects managed and implemented by resolute minds that changed the world.

View the synopsis of “America’s Greatest Projects: From the Panama Canal to the Alaskan Pipeline” on YouTube.

Customers can purchase “America’s Greatest Projects: Why America is Exceptional” at traditional brick-and-mortar bookstores or online at Amazon.com, Apple iTunes store, or Barnes and Noble.