“One Man’s Pain” from Christian Faith Publishing author Dominic Branca is a gripping story about an ex-cop who rediscovers his purpose in life after experiencing loss in his past. 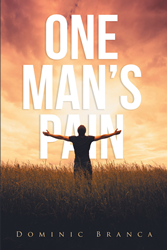 “One Man’s Pain”: an enthralling narrative about Tom Brado, an ex-cop who finds his will to live once more after finding solace in his tragedy and dealing with the mysteries of a small town. “One Man’s Pain” is the creation of published author Dominic Branca, a twenty-seven-year-old writer who works part-time in support services for developmentally disabled adults and attends graduate school, focusing in clinical psychology.

Branca shares, “Ex-cop Tom Brado thought his life was over. His wife and three children are gone, killed by a criminal he could never catch. Once a big-city detective and devout Catholic, Tom has exiled himself away in the small town of Rocky Hills. Here he can forget his past, forget faith, and forget God, or so he thinks. For five years, life goes on like this, but it all changes one day when a priest knocks on Tom’s door. He’s rebuilding an old church in town and wants Tom’s help. At first, Tom is not interested, but after a confrontation with the town sheriff, Tom decides to get involved with the priest after all.

“Initially, only wanting to use the priest for information about the sheriff, Tom gradually begins to find himself truly caring about the priest’s mission and begins to find a renewed faith in God. But Tom’s problems are far from over because the sheriff is still after him, and it seems no one in town will stand up to him. Tom suspects the sheriff is hiding something but doesn’t know how to uncover it. Not until a man who left town many years earlier returns and offers to help Tom.

“Tom isn’t sure if he can trust his new friend, but what choice does he have? Slowly, Tom learns how each character’s past is connected and tragic, just like his. Tom also finds a new faith in God and begins to rebuild his life. But the sheriff is not giving up, and Tom’s efforts lead him to a final showdown where either a corrupt sheriff will fall, or he will destroy Tom and his new friends. The town of Rocky Hills is hiding a lot more than meets the eye, and slowly, Tom begins to see his mission in life is to help it find healing and faith in God once again. But can he do it, or will a corrupt sheriff and Tom’s own demons destroy him, and the rest of the town with him?”

Published by Christian Faith Publishing, Dominic Branca’s new book contains the struggles and triumphs of a man whose life is lived in faith despite being fraught with danger and uncertainty.

View the synopsis of “One Man’s Pain” on YouTube.

Consumers can purchase “One Man’s Pain” at traditional brick-and-mortar bookstores or online at Amazon.com, Apple iTunes store, or Barnes and Noble.

For additional information or inquiries about “One Man’s Pain,” contact the Christian Faith Publishing media department at 866-554-0919.