“God’s Light Bulb” from Christian Faith Publishing author Dr. Muzella P. Hayes Ph.D is an insightful understanding that metaphorically utilizes the light bulb to demonstrate the luminosity of God’s grace over His people. 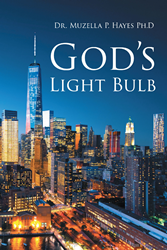 “God’s Light Bulb”: a detailed discourse that emphasizes the purpose and function of light itself, which will then lead to the knowledge and understanding of light in a biblical sense. “God’s Light Bulb” is the creation of published author Dr. Muzella P. Hayes Ph.D, an evangelist at Church of God at Iron Hill in Newark, Delaware, which gave her an opportunity to preach God’s Word to all that will listen and bring Christ Jesus. She is a registered nurse who holds a master’s degree in nursing leadership and a doctor of philosophy of biblical studies at Newburgh Theological Seminary and Bible College. She is also a diabetes lay teacher for the state of Delaware.

Dr. Hayes shares, “Earthly man does not always understand the revelations of the Word; it is therefore sometimes necessary to use metaphors or parables as Jesus did when teaching the Jews about the kingdom of God. In the same vein, this dissertation uses the metaphor of a light bulb that can emanate light—when plugged into an electrical source—to the light that shines from God. Going further with this metaphor, the ‘light bulb of God’ takes its energy from the Lord himself as it shines in the lives of everyone who believes in God.

“Light is used to show the way, as roads, airport runways, and stations are lit to facilitate easier traveling to humans. Light, as humans know it, was only possible after electricity was discovered. Caldwell stated that in New York, ‘by the late 1870’s electric light was no longer a novelty, though the city didn’t get its first consumer power grid until eight-teen eighty-two.’ The city put electrical lights to good use as the New York Train System lit up the tracks twenty-four hours a day—this provided an indication of the way the train would go. This was considered light that would guide the way for so many people travelling the city.

“This train line pointing to the way people should go can be seen as a metaphor for The Way in a biblical sense. There are people who do not know or believe that the first light was God’s light.”

Published by Christian Faith Publishing, Dr. Muzella P. Hayes Ph.D’s new book is a comprehensive collection of thoughts that will influence readers to begin a discourse and formulate questions and discussions in relation to man’s creation, as well as the different systems that work together in reaching an ultimate goal.

View a synopsis of “God’s Light Bulb” on YouTube.