“Nikita’s Story: Part III: Eata Doege” from Christian Faith Publishing author Gayle Hansen follows the defining moments of Nikita and his fate of becoming his world’s new king despite the throes of invasion. 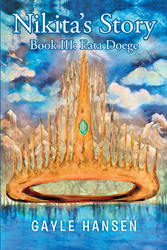 Hansen shares, “What would you do if faced with an invasion of your home/planet?

Nikita Markain Malin has returned to his people, bringing Jennie/Jenny with him, just in time. But, there remains so much more to do and an invasion to deal with. How can Niki's people regain what was unknowingly taken from them? Keyenoa (God) has a plan and making Niki the next High King is just the beginning. Jennie/Jenny is an important factor in the next step; but first Niki must convince his kings.

“Where is Keyenoa going to take Niki and Jennie/Jenny? How are Niki's kings and their people going to accept what Niki knows Keyenoa wants them to do?”

Published by Christian Faith Publishing, Gayle Hansen’s new book exudes with a plot filled with heroic deeds and acceptance of one’s destiny to greatness in the face of danger and toil.

Witness Nikita as he reaches the epitome by becoming the divine’s chosen leader that cements his legacy as the next High King.