“Thomas Jefferson’s ‘Wee Little Book’ Purified by Fire” from Christian Faith Publishing author Harry Swanson is a compelling study of work completed by a key figure in American history along with added interpretation of God’s word. 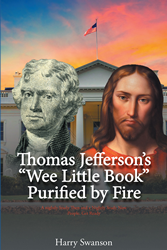 “Thomas Jefferson’s ‘Wee Little Book’ Purified by Fire”: a thought-provoking study of key scripture. “Thomas Jefferson’s ‘Wee Little Book’ Purified by Fire” is the creation of published author Harry Swanson, a dedicated husband, father, and grandfather who had worked in finance and administration for forty-five years and is now retired. He holds a baccalaureate degree in accounting and a master’s degree in business and finance. Swanson worked under such titles as controller, director of finance and administration, CFO, and financial management consultant for both large and small, profit and nonprofit companies located throughout Long Island and New York City.

Swanson shares, “Thomas Jefferson lived a very successful, accomplished life and was one of the most intelligent of the Founding Fathers. He is probably most remembered as the principal author of the Declaration of Independence. Jefferson served as the governor of Virginia, congressman, the first secretary of state under George Washington, vice president under John Adams, and president of the United States from 1801 to 1809. He was also a diplomat, lawyer, architect and could speak several languages.

“As president, he signed the congressional Act Prohibiting Importation of Slaves and was a big advocate for religious freedom. Thomas Jefferson thought highly of the Bible and made frequent use of its references and passages. He was a Bible enthusiast and often gave Bibles as gifts to family members.

“Jefferson’s greatest gift may not have been his work on the Declaration of Independence but one that he called his ‘wee little book.’

“He took on a project to collect the best and most concise moral teachings known. After a lengthy search, he found them in Jesus’s teaching as recorded in the Gospels, which Jefferson believed were the most sublime and benevolent code of morals ever offered to man.

“Finally, after several years of planning, in 1820 and at age seventy-seven, he finished construction of his book by cutting excerpts from the Gospels of the New Testament and arranging them in chronological and topical order covering the story of Jesus’s life, parables, and moral teaching. The work did include miracles and the supernatural such as heaven, hell, angels, devil, eternal life, and more. Jefferson’s purpose was to clarify Jesus’s major teachings into one short collection for his own nightly study.

“If there’s anything the world needs today, it’s the fulfillment of the Great Commission—to go and tell all the world about the teachings of the Lord Jesus Christ, including his life, teachings, sufferings, crucifixion, and resurrection.